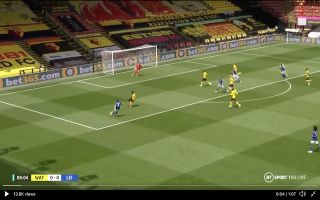 In the 89th minute of Leicester’s clash with Watford this afternoon, Ben Chilwell stunned viewers and pundits alike with a magnificent strike to give the Foxes a late opener.

Demarai Gray floated an inch-perfect pass into the marauding full-back, Chilwell took a touch into the box before firing the ball into the top corner with an absolute rocket of a strike.

According to an update from Italian journalist Fabrizio Romano earlier this week, Chilwell is Chelsea’s prime left-back target, with the Blues reportedly in ongoing talks for the ace.

Take a look at the England international’s amazing strike below:

A great strike from the England full-back. Ben Foster didn't have a chance!#PLReturns pic.twitter.com/4NKYvjKgGm

Chilwell has firmly established himself as England No.1 choice at left-back, with the ace now looking as though he’s added goals to his game, a big-money move seems inevitable.