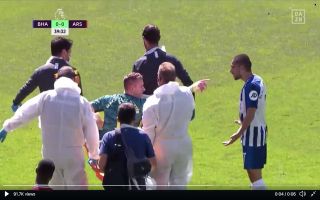 Arsenal goalkeeper Bernd Leno was forced off after an awkward landing following a collision with Brighton striker Neal Maupay, the incident leading to the injury can be seen here.

After the Seagulls played a long ball up the pitch, Leno came out claim the ball and after doing so he was knocked to the ground by a jumping Maupay.

With the Germany international in agony for some time, it wasn’t surprising to see that Leno raged at the Frenchman when he was being stretchered off.

Leno pointed and shouted at the ace, in what can only be interpreted as a message that the former Leverkusen man would rather fight than forgive Maupay after the clash.

Take a look at Leno’s reaction to Maupay when he was being carried off the pitch below:

Bernd Leno is not happy with Neal Maupay #arsenal pic.twitter.com/owsZz4S7Fz

Bernd Leno was not happy with Neal Maupay ?

He had some words with the Brighton forward when exiting the pitch…?#PLReturns pic.twitter.com/nHhcjZDMIQ

Hopefully, the fact that Leno was conscious and still had the energy to speak is a sign that the injury isn’t too serious.

Of course, we hate seeing players go down in such a manner, but were Maupay’s actions really intentional?

The main talking point should be Leno’s health and not the manner in which the incident occurred, attackers often challenge keepers like this – but most collisions don’t end with an injury.