Chelsea came from going a goal down against Aston Villa at Villa Park to win 2-1 with a quickfire double from substitute Christian Pulisic and Olivier Giroud to go 5 points clear of Manchester United in fourth place in the Premier League table.

The Blues have been handed a boost in their bid to finish in the top four with today’s victory.

Subs: Caballero, James, Emerson, Zouma, Gilmour, Barkley on for Kovacic 54′, Pedro, Pulisic on for Loftus-Cheek 54′, Abraham on for Giroud 79′

Subs: Reina, Elmohamady, Taylor, Nakamba on for Hourihane 70′, Jota on for McGinn 86′, Trezeguet on for El Ghazi 70′, Vassilev, Borja, Samatta on for Davis 56′

The first fifteen minutes of the game was a scrappy affair, with neither club able to get into any noticeable rhythm. Mason Mount tested Nyland in goal with a superbly struck effort which was swerving on the 20-minute mark, but the Villa keeper made a fine save.

Villa frustrated Chelsea by defending deep while not offering the Blues any space as the first half progressed. El Ghazi then hit the target with a shot from outside the box that Chelsea keeper Kepa saved in the 32nd minute.

Chelsea went close in the 37th minute with superb play from Mason Mount on the right flank as he dribbled into the box and fizzed the ball across the goal but Loftus-Cheek couldn’t get on the end of it.

Villa took the lead in the 42nd minute after Kortney Hause scored on the rebound of a Kepa save in a goalmouth scramble after a perfectly flighted ball into the box from Douglas Luiz.

It's been all #CFC but Kortney Hause has put the home side in front.pic.twitter.com/EnRpg6YFOh

Kovacic’s effort saw his shot sail wide from outside the box which would be the last bit of action from the first half at Villa Park.

Chelsea began to mount pressure on Villa as the second half began but the Villains stayed resolute in defending and keeping it tight at the back.

Lampard turned to his bench to send on Ross Barkley and Christian Pulisic in the 54-minute mark a bid to spark Chelsea’s attack.

Christian Pulisic was straight in the thick of it and deftly converted Cezar Azpilicueta’s cross at the far post with a superbly taken finish that went into goal off the crossbar as the Blues equalised in the 60th minute with the American scoring just 6 minutes after coming on.

Olivier Giroud then hit the back of the net after turning and swivelling brilliantly in the box from a Cezar Azpilicueta low cross with the Blues taking the lead to go 2-1 up in the second half with a quickfire double.

What a turnaround from #CFC! ?

Two goals in as many minutes from Pulisic and Giroud give them a 2-1 lead at Villa Park!

Villa captain Jack Grealish was brought down by Willian just outside the box, very close to conceding a penalty, but Hause couldn’t convert the header from resulting freekick.

Villa made a couple of changes to try and chase the game but as the clock wound down they tried to put Chelsea on the backfoot but the Blues defended well and in numbers to thwart the home side.

As the game approached 85 minutes, Chelsea were on the front foot winning a series of corners keeping the pressure on Villa.

Jota went agonisingly close just after he came on with his first touch in the 86th minute as his shot rolled outside for a goal-kick narrowly missing the far post which was the closest Villa came to equalise. 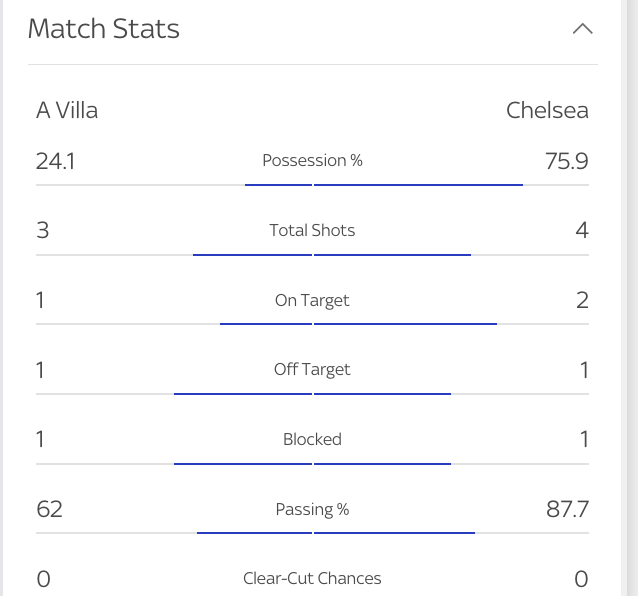 Frank Lampard will surely be proud of his Chelsea team for coming from behind to mount a comeback to beat Villa taking their chance to get some daylight between themselves and Manchester United in their bid to finish in the top four after United dropped points against Spurs.

It’s a massive three points for Chelsea who now have a 5 point gap between themselves and United and are 3 points behind Leicester who are in 3rd as the Blues look to qualify for the Champions League this season.