Before the likes of Eden Hazard and Gianfranco Zola there was Alan Hudson.

A silky, skilful midfielder who could also put his foot in if needed, ‘Huddy’ was the fulcrum and creative genius behind the successful Chelsea sides of the early 1970s, often affectionately termed the ‘Kings of the King’s Road.’

Despite generally being considered as one of Chelsea’s greatest ever players, perhaps even their best of all, there’s clearly no love lost between a man who is the most locally born to turn out for the club who gave him his chance in professional football as a precocious teenager.

They even snubbed him for the recent reunion of the 1970 FA Cup winning squad, which may have something to do with his outspoken nature.

Toeing the party line has never come naturally to him in any event, and telling it like it is has often landed him in trouble.

However, just as in his playing career, his authenticity, when many ex-pros will say or do anything for exposure or cash, is laudable.

Today is his 69th birthday, and the west Londoners still refuse to invite Hudson to matches at Stamford Bridge or to allow him to work with the club in some capacity.

“I must admit that it is a mystery to me, especially after so long,” Hudson told CaughtOffside in an exclusive interview.

“But what disappoints me more than anything is nobody behind the scenes seems to care that their most local player is forever snubbed. Yes I know Bruce Buck is behind it but it’s gone on from Mears to Bates to Abramovich… how can that be?

“I might well not be their greatest ever player but I am the best from the district, therefore I could be used as the local representative to find players from the back streets of Chelsea…

“I truly hate the ignorance of those ‘within’ who don’t appreciate that I was a part of the team that broke new ground by winning their first ever FA Cup and European trophy.

“I was choked that I could not join up with my team-mates who I haven’t seen for so long, and the club deprived me of that pleasure. For that I despise they way they treat someone like me who has done more for the club than the people who they look after.”

The depth of feeling clearly weighs heavily on Hudson’s shoulders.

Often characterised as a ‘drinker,’ particularly since his playing career ended, Huddy will admit that whilst he enjoys a tipple, that label isn’t one that should define him.

The fact that he fell on hard times a few years ago and had to live in a hostel for a while was down to an error by the council when re-housing him, though the tabloids would have everyone believe otherwise.

In fact, the wider media have painted a picture of him that Huddy insists isn’t entirely inaccurate, but it has allowed supporters to feed into that narrative and dismiss him as a ‘has been’ with a huge chip on his shoulder.

His outbursts have frequently antagonised Chelsea’s supporters who appear tired of hearing about a side of their club they’ll never experience and don’t want to believe is true.

Huddy would at least like them to be a little more understanding of his plight.

“I say to the fans ‘put yourself in my position’,” he continued.

“So they sold us (Huddy to Stoke City for a record £240,000 and Osgood to Southampton) and made us the ‘bad guys,’ when it was them who sold us and the following season got relegated.

“If any supporter would accept the same treatment from their job/employer – and a job they did brilliantly I might add – then more fool them.

“My fondest playing memory is winning the Cup Winners’ Cup. For those who watched me from my first match to my last in a blue shirt I want to be remembered as a tremendous player but who gave them more than I got from them – the club that is.

“It is a crying shame… I had a great rapport with the Shed because I used to stand in it.”

It’s obvious that the way Chelsea do their business off of the pitch isn’t to Hudson’s taste either, and in the unlikely event that they were wishing to offer an olive branch at this late stage, there’s no chance it will be accepted.

Much of that stems from the aftermath of a horrific accident in December 1997 which almost killed Hudson. Whilst walking home in Mile End after attending a function, he was knocked over with such force that he went flying into a tree on the opposite side of the road from which he’d walked.

His injuries at the time were extensive (and can be seen in the graphic below), and there was more than one occasion where he was read the last rites by a priest. Even today, the scars from the 70 or so operations he’s had to have since, are clearly visible. 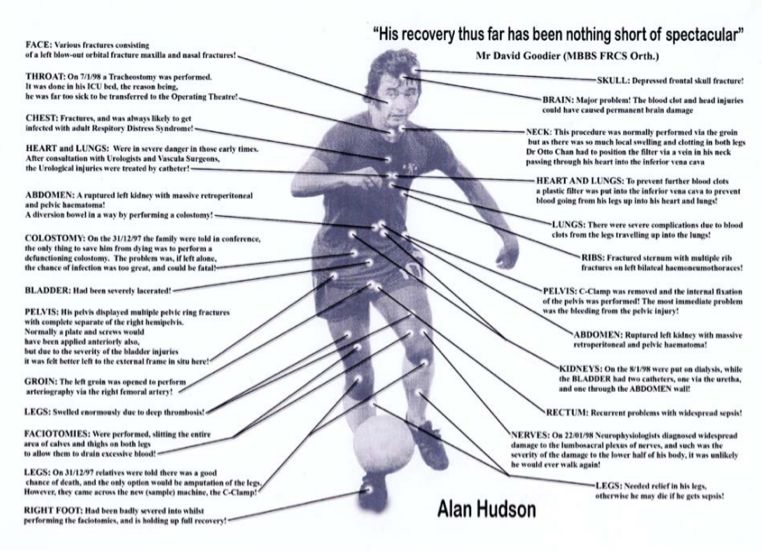 In a coma for 59 days, and with injuries to every part of his body, it’s a wonder how he ever survived what he now believes was a hit and run attempt on his life. Were it not for pioneering surgery by Dr. David Goodier, using techniques never before used, Alan Hudson wouldn’t be with us today.

“They (Chelsea) ‘use’ people, which I don’t like. Of course, they like players who turn up and say nothing. They have several players who they label LEGENDS, but I think you’ll agree if you look at those names they’re anything but,” Hudson added.

“I think they’ll need to buy me a house and give me a massive lump sum otherwise I’ll stay in my council studio flat and watch the matches on TV.

“Strangely enough, because of the mistreatment I have had to put up with over the years I now choose not to watch them and I could not be more delighted that Liverpool are picking up that trophy.

“Remember… when I was in a 59-day coma, Chelsea didn’t even send a bunch of flowers to my mother and they knew about my accident because it was all over the news and and in the papers.

“That is what years of abuse does to you, the team I once loved is now like an ex-wife who kicked me out years ago.

“I could not be like they are behind the scenes. When they want you there when a former player dies as they did with Osgood – to go on the pitch etc.

“No, it’s too late. I loathe hypocrisy and that is Chelsea FC.”