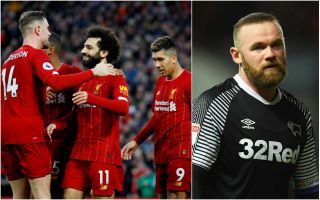 Manchester United legend Wayne Rooney has told Liverpool that securing the future of manager Jurgen Klopp is one of the most important things they can do to keep their place at the top for the long run.

The Reds are on the brink of Premier League title glory, needing just two more wins to finally end their 30-year wait for the title, with Man Utd one of the dominant forces of the Premier League era.

Rooney played a big part in the Red Devils’ success, but he says the important thing was the club’s legendary manager Sir Alex Ferguson.

Writing in his column for the Times, the former England international says it’s now vital that Liverpool can also keep Klopp for as long as possible and allow the German tactician to build a dynasty at Anfield.

“They have huge potential to win more trophies. Klopp says it’s impossible for any club to dominate like United once did but he is wrong. There’s a simple way for Liverpool: let Klopp go on and on,” Rooney said.

“United dominated because Fergie stayed so long. I think if Klopp, who is only 53, stayed at Anfield for the next ten years Liverpool would win at least five Premier League titles.

“He could keep building great sides because, as I mentioned, players join clubs to work with managers as good as him. On the flipside, players stay at clubs because of managers, too. And if Klopp left it would be no surprise to see the likes of Mo Salah, Sadio Mane and Roberto Firmino also deciding to move on.

“If I were one of Liverpool’s owners, I would be doing everything in my power to tie him down for many years.”

LFC fans will surely agree, with Klopp truly working his magic since taking over from Brendan Rodgers, with his signings and his tactics making him one of the very finest managers in the world.