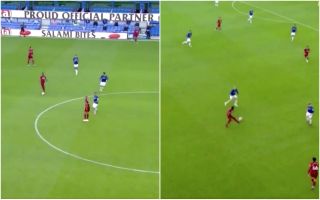 In the 43rd minute of Liverpool’s derby clash with Everton this evening, Naby Keita had his best moment of the game with a brilliant passage of play.

The 25-year-old picked up the ball in his own half and continued to surge forward after laying the ball off to one of his teammates.

Keita picked up the ball once more after a pass from Trent Alexander-Arnold and proceeded to play two lovely quick one-twos in quick succession in order to take the Reds into the final third.

The Guinea star laid the ball off to Sadio Mane and the forward played a low cross into the box, but Takumi Minamino’s effort was blocked.

Take a look at the African maestro’s brilliant work below:

Keita has struggled with injuries this season, but this a perfect example of the kind of ability he has. The ace was replaced in the 65th minute of the encounter.

Keita offers Liverpool’s midfield a different dimension, Jurgen Klopp and the Reds just need to find a way to keep the ace fit enough to give him the consistent chance to showcase this talent.