According to the Sun via French outlet RMC Sport, Arsenal have received a boost in their chase of Adil Aouchiche as the 17-year-old has told Paris Saint-Germain’s hierarchy that he wants to leave.

The Sun claim that Mikel Arteta has identified the attacking midfielder as a possible target as the Gunners look set to operate on a very limited transfer budget this summer.

It’s added that the PSG were keen on tying the talent down to a new contract, with the ace being integrated into the first-team this season, Aouchiche has made three senior appearances this term.

The Gunners will need to battle Saint-Etienne for Aouchiche’s signature, the Ligue 1 outfit are currently leading the race for the ace but it will be interesting to see if they can meet his demands.

It’s not surprising that RMC Sport claim that the youngster has informed the French giants that he’d like to continue his development elsewhere, he could get more regular senior football with other teams.

Saint-Etienne and Arsenal are two sides that have a wonderful track record of developing youth players into stars, the Gunners know just what they’re competing with as they signed William Saliba from the French outfit last summer.

With Ligue 1 sides perhaps set to face the biggest financial losses of teams in Europe’s top five leagues, after the decision to curtail the season, it’s fair to assume that Arsenal will be better equipped to meet Aouchiche’s demands.

On the other hand, Saint-Etienne could offer the ace a more prominent role than the Gunners would be able to as their squad’s much smaller and they’re of course a much lower profile side.

Aouchiche is predominantly used as a central attacking midfielder, the talent made his PSG debut back in August and bagged his first professional goal in a Coupe de France tie in January.

Aouchiche has also been deployed as a central midfielder, centre-forward and left-winger this season, so he’s got the kind of versatility that can help him get first-team chances ahead of other talents.

The starlet has been capped at Under-16s, 17s and 18s level for France. 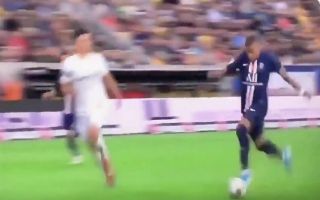