Jamie Redknapp believes Manchester United midfielder Bruno Fernandes looks to have what it takes to be an elite goal-scoring midfield player in the Frank Lampard mould.

However, the pundit also feels this playing style could be frustrating for the forwards Fernandes plays with, as it so often means shooting on sight and possibly ignoring runs made by the likes of Marcus Rashford.

Fernandes has made a real impression since joining Man Utd from Sporting Lisbon in January, and Redknapp was full of praise for the player in his column in the Daily Mail, despite the suggestion that he could foresee his playing style occasionally proving frustrating for Rashford and others in the final third who will want to be getting the ball off the Portugal international.

“My advice to any young, aspiring midfielders out there would be to study Manchester United’s Bruno Fernandes,” Redknapp said.

“Look at how he strikes the ball when shooting from distance. Look at how he creates such a dip and swerve that it makes his shots more difficult to stop.”

He added: “I’ve told my boy to watch how Fernandes only needs half a yard to shoot from whatever angle.

“Frank Lampard was the same, and that is largely why the now Chelsea manager holds the record as the top-scoring midfielder in Premier League history.

Bruno Fernandes has shone since his January move to Manchester United

“It might frustrate your forwards on game day. Maybe there will be times when Marcus Rashford says he was in a better position and should have been played in. Maybe Fernandes will be accused of greediness on the odd occasion.

“But it will be worth it for his goal return. In 2018-19, Fernandes’ last full season for Sporting Lisbon, he got 32 goals and 18 assists in 53 games. That is what Ole Gunnar Solskjaer wants from him now.”

United were back in Premier League action on Friday and Fernandes scored from the spot to equalise against Tottenham.

It’s not an ideal result, however, with the Red Devils now falling further behind Chelsea, who won against Aston Villa on Sunday, in the race for a top four spot. 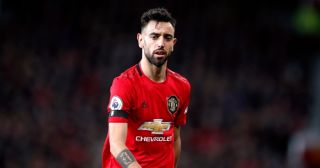