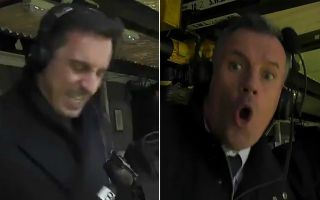 See the video clips below as Carragher admits during his analysis that Everton would do well to target the Croatian, who has often shown himself to be an unreliable and error-prone performer for the Reds.

MORE: Steven Gerrard names one big reason he was tempted to quit Liverpool for transfer to Chelsea

Tell you what’s the right decision, play on Lovren

(Under his breath) Useless

Carragher then seems to quietly call Lovren “useless” shortly afterwards, with co-pundit Gary Neville joking that players used to say the same about the LFC legend during his playing days.

As noted by Empire of the Kop, it seems Carragher’s beef with Lovren may also have been down to some social media activity from the 30-year-old, as he liked a tweet criticising the pundit over that famous video of him spitting at a fan from his car window.