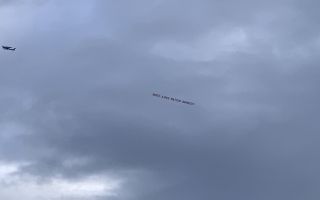 In the opening stages of Manchester City’s Premier League encounter with Burnley this evening, a disgusting ‘White Lives Matter Burnley’ banner was flown over the Etihad Stadium.

There’s absolutely no excuse for such a gesture, this banner undermines the current work of the ‘Black Lives Matter’ movement that are battling to shed light on racial injustice across the entire world.

This incident will now likely overshadow the game of football that is going on below.

The UK isn't racist by the way.. pic.twitter.com/nD6nTNd71I

Sickening to Witness: A light aircraft buzzes over stadium during Premier League game between Manchester City and Burnley towing a banner proclaiming "White Lives Matter – Burnley." Every Nation has so much work to do #BlackLivesMatter pic.twitter.com/hr9nRjuDH3

Burnley need to be acting swiftly to identify and punish the culprits of this sick message, the authorities also need to take action against this disgusting overt form of racism.

UPDATE: Burnley have now posted a statement in response to the incident.