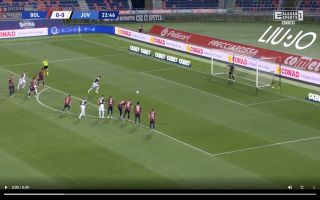 In the 23rd minute of Juventus’ Serie A clash against Bologna this evening, Cristiano Ronaldo handed the Turin outfit the lead from the penalty spot.

Maurizio Sarri’s side were awarded a spot kick when Matthijs de Ligt was brought down during a corner in the 20th minute by Stefano Denswil.

Ronaldo stepped up confidently and sent the goalkeeper the wrong way with a superb penalty, the superstar missed his previous spot-kick against AC Milan 10 days ago.

Take a look at the five-time Ballon d’Or winner’s spot-kick and the call that led to it below:

Cristiano Ronaldo scores his first goal after the restart.

Back to his signature celebration ? pic.twitter.com/MWQjUVGBH2

Pictures from ESPN and Eleven Sports.

Last week, Ronaldo actually missed the chance to take a penalty as Napoli stunned the Old Lady in the Coppa Italia shootout.