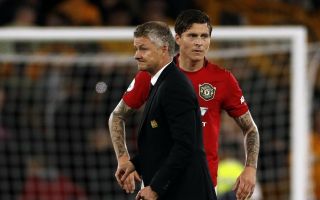 Manchester United manager Ole Gunnar Solskjaer has been told he may not need the signing of Aston Villa star Jack Grealish because of the emerging partnership of Bruno Fernandes and Paul Pogba.

The duo played together for the first time on Friday as United drew 1-1 with Tottenham on their return to Premier League action after the three-month suspension amid the coronavirus pandemic.

Fernandes has been a big hit since joining United from Sporting Lisbon in January, and he impressed again in this match, scoring the equaliser from the spot and making it into Garth Crooks’ team of the week on BBC Sport.

The Portugal international’s presence has not, however, stopped United being linked with similar players, with Villa ace Grealish recently linked as an £80million target for the Red Devils by the Daily Mail.

Crooks, however, says that he doesn’t think United need Grealish, with the Pogba and Fernandes partnership potentially enough for Solskjaer’s side in that area of the pitch.

Jack Grealish in action for Aston Villa – is he needed at Manchester United?

He said: “With Fernandes and Pogba in the side, they suddenly look like a midfield to be taken seriously as opposed to what we saw earlier in the season – a group of soccer adolescents hurriedly thrown together and learning on the job.

“With a fit Pogba and Fernandes running the show, they no longer need Jack Grealish. The likes of Scott McTominay, Fred and Nemanja Matic are the real support acts.”