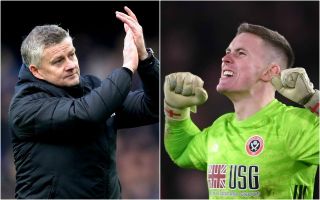 Manchester United manager Ole Gunnar Solskjaer has heaped praise onto young goalkeeper Dean Henderson, saying he predicts he’ll one day be number one for the Red Devils and the England national team.

The Red Devils face a real conundrum in goal at the moment, with David de Gea suffering a big dip in form for some time now, while Henderson has really impressed on loan at Sheffield United.

The 23-year-old looks a huge prospect and may well be ready to replace De Gea as United’s number one already, though that would obviously be an extremely big call.

De Gea, for all his current struggles, has been a world class performer for United for so long, and the Spain international surely deserves a little loyalty from the club.

That said, MUFC can’t stick with the 29-year-old for too long if he does not improve, especially as Henderson really looks like he deserves a shot at becoming a starter for Solskjaer’s side.

Discussing the player today, the Norwegian tactician made the interesting prediction, as quoted in the tweet below by Simon Peach, that Henderson would one day be number one for both Man Utd and England, though he didn’t say when…

Ole Gunnar Solskjaer on Dean Henderson: “He's learning all the time. He’s a passionate keeper that wants to be the best so he’s developing, he’s got good coaching there. I think one day he'll be England No.1 and Man United No.1 and it’s up to him to keep developing” #MUFC

De Gea was badly at fault for Tottenham’s goal in Friday’s game, and it remains to be seen how much longer he can continue to get away with such glaring and costly errors.