Kasper Schmeichel was the hero for the Foxes after his 14th minute penalty save gave his side the platform to go on and draw the game against a dogged and tenacious Brighton side.

In sweltering conditions at the King Power Stadium, neither side really got going to any extent, with congestion in midfield ensuring that there was little flow to the game.

Here’s how the two sides lined up:

With 12 shots between the sides, you’d be forgiven for thinking that this was an exciting opening 45, but the truth is it was anything but.

Only three shots were on target, with Brighton’s solitary strike coming from Neal Maupay’s 14thminute penalty, expertly saved down to his right by Kasper Schmeichel.

How crucial could this be to Brighton’s season? ?

It finishes 0-0 at the King Power Stadium but Neal Maupay could have given them all 3 points with this penalty! ?

Ben Chilwell looked busy and interested for the hosts, but his lack of service to the front men was noticeable.

Brighton stayed on the front foot, and took the game to the hosts whenever they had the chance, however, they too never looked like finding the net in what was a disappointing half.

As the game hit the hour mark, the status quo hadn’t changed, and neither had the nature of the match.

On a rare Leicester breakaway, Jamie Vardy managed to find Kelechi Iheanacho on the edge of the box and as he went to pull the trigger what looked like a blatant push went unpunished.

The Foxes’ play down the right side, particularly when it involved Demarai Gray, was incisive, though for all of their industry there was no reward.

In fact, once Brighton had made a triple substitution, it was they who looked the more threatening.

One of those subs, Leandro Trossard, certainly made his presence felt, keeping Jonny Evans on his toes.

Leicester would come closest to breaking the deadlock in the latter stages, with James Maddison’s long-range effort spinning wide. 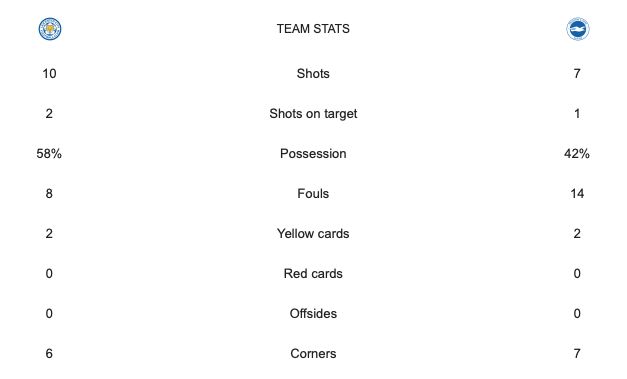 With home advantage, Brendan Rodgers might’ve felt that three points would’ve been far easier to come by, however, Brighton showed what they were all about here, just as they did against Arsenal.

The visitors were compact for the most part, worked incredibly hard to deny Jamie Vardy and his team-mates any space to run into, and on this showing Brighton deserve to be far better off than their current 15th place.

Chelsea can close to within a point of Leicester with a win in their next match, and that will surely be a concern to Rodgers with seven games still to play.