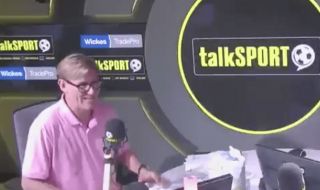 Never one to hold back on giving his opinion, former Crystal Palace chairman, Simon Jordan, has criticised Arsenal for a perceived sense of entitlement.

The Gunners have clearly underperformed over the past few seasons, with Jordan also suggesting on talkSPORT that there needs to be a culture change at the club.

His views, though honest and forthright, are bound to get under the skin of the north Londoners, but with Mikel Arteta’s side still 43 points behind Liverpool, maybe he has a point.

You can hear his full rant below:

“Arsenal have a sense of entitlement about what sort of club they are!”

“There needs to be a culture change.”

“I don’t know whether somebody who’s learning will have the gravitas for it.”@SJOpinion10 questions whether Mikel Arteta is the right man for Arsenal. pic.twitter.com/Zdsdlofm9T