Anthony Martial was the hero for Manchester United as they swept a disappointing Sheffield United side aside at Old Trafford.

With Bruno Fernandes and Paul Pogba pulling the strings in midfield, the Red Devils were on the front foot throughout a 90 minutes that would surely have pleased Ole Gunnar Solskjaer.

Subs: 46’ Norwood off for McBurnie, 46’ Mousset off for Berge, ’64 McGoldrick off for Zivkovic

A fast start from both sides belied the searing heat at Old Trafford, with Man United’s Mason Greenwood guilty of not setting up Bruno Fernandes who was well placed just two minutes in.

There was barely time to draw breath as the action see-sawed quickly from one end to the other. After six minutes, United were ahead when Marcus Rashford’s drilled cross was anticipated by Anthony Martial for the opener.

Martial gets #MUFC off to a flyer after some good work from Rashford down the right.

The roles were reversed on 12, but a slight delay in the pass from the Frenchman meant Rashford had to check his run and he could only steer the ball wide as a result.

Consistent pressure from the hosts saw Rashford with another guilt-edged chance before the 20-minute mark, but the England international again fluffed his lines.

It seemed to be only a matter of time before the second goal arrived with Fernandes magnificent yet again, but as the half wore on it was the Blades in the ascendency.

The heat began to play a part in the closing stages too as the attacks from both sides were more sporadic than the opening exchanges.

Two minutes before the break, Martial was in the right place again to get on the end of Aaron Wan-Bissaka’s low cross, the 2-0 half-time score giving Ole Gunnar Solskjaer some breathing space.

Eyes on the prize! ?

Martial is at the double for #MUFC just before the break!

Another burst of forward play opened the second 45 and it was noticeable how quickly United’s midfielders were hounded by their counterparts in order to dilute their influence.

Indeed, it was the visitors who had the first chance after the restart, substitute Oli McBurnie not able to connect with an inviting cross.

Fernandes managed to wriggle free to set up Mason Greenwood, and were it not for Phil Jagielka’s outstretched leg, the Red Devils would’ve surged further ahead.

Able to keep Sheffield United at arm’s length for the most part, the visitors, nevertheless, still had their moments, though none of their incisive passing and quality of movement tested an under-pressure David de Gea.

With 17 minutes to play, a super Man United move involving Paul Pogba, Fernandes, Rashford and Martial saw the latter dink a delightful chip over  Simon Moore for the first hat-trick of his professional career.

And after a seven-year wait, no fans are there to see it. pic.twitter.com/cnNAL0nXj1

That was the cue for Ole Gunnar Solskjaer to take full advantage of his subs bench, with all five available coming on en-masse.

McBurnie at least managed to bring a save out of De Gea in the latter stages, but Chris Wilder is unlikely to be happy with that showing.

Solskjaer, meanwhile, can look ahead to the remaining games with confidence, knowing his team are peaking at just the right time. 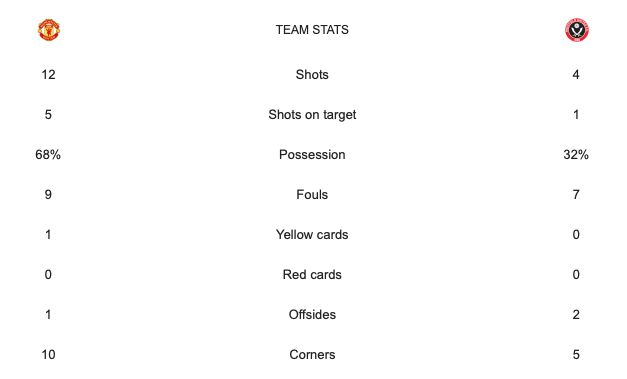 It would be easy to brush this off as an expected victory for Ole Gunnar Solskjaer’s side, but the win is now Man United’s 13th game unbeaten, taking into account games before the break for the coronavirus pandemic.

With all of the Red Devils’ star players now recovered from injury, there is every chance that United have the momentum to take them to a Champions League berth by the end of the campaign.

Bruno Fernandes remains the conduit through which all of United’s good work comes, and alongside Paul Pogba, the pair were imperious.

On a day when Sheffield United could’ve leapfrogged their opponents, the less said about their performance the better.