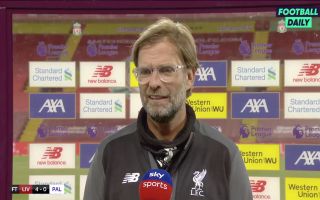 Liverpool manager Jurgen Klopp joked that Pep Guardiola ‘should play poker’ after he was alerted to the Manchester City boss’ apparent plans to rest players in tomorrow’s mammoth clash against Chelsea.

Klopp was informed of Guardiola’s team selection plans during his post-match interview after Liverpool’s 4-0 win against Crystal Palace this evening.

The German was shocked at first as he exclaimed “What?” when the reporter relayed Guardiola’s apparent focus on the FA Cup.

City need to win against the Blues tomorrow night or the Reds will be crowned champions, Pep fielding a weaker side would of course significantly improve Chelsea’s chances of winning or drawing.

Take a look at what Klopp had to say below:

If City don’t manage three points at Stamford Bridge tomorrow night, the Reds will become champions at the final whistle, meaning they’d go into their clash with Pep’s side next week as winners.

This would mean that City’s players would have to give the Liverpool team the traditional guard of honour when they walk out, maybe this will be an easier pill for the side to swallow as opposed to the Reds actually lifting the title against the side that have become their rivals in recent years.

Liverpool will inevitably secure the title, so this apparent bit of mind games really benefits neither of the two – in fact the only team that will be impacted positively by this could be Chelsea.