Liverpool turned on the style in tonight’s 4-0 victory against Crystal Palace, any question marks about their form in the attacking third were dashed with four wonderful goals.

Liverpool can now secure the Premier League title if Manchester City fail to win in their mammoth clash against Chelsea tomorrow evening.

Alternatively the Reds can seal the historic triumph as long as they avoid defeat against Pep Guardiola’s side next time out.

Here’s how the two sides lined up for the clash:

Subs: 64′ Oxlade-Chamberlain on for Henderson, 74′ Williams and Minamino on for Alexander-Arnold and Firmino, 84′ Elliott and Keita on for Mane and Robertson.

Subs: 15′ Meyer on for Zaha, 66′ Riedewald and Milivojevic on for Kouyate and McArthur, 84′ Pierrick on for Ayew.

The first solid chance of the game unsurprisingly fell to the league leaders in the 16th minute, Sadio Mane teed up Roberto Firmino with a lovely back-heel, Wayne Hennessey stopped the Reds though.

That was clearly a sign of spectacular things to come, in the 22nd minute of the tie, Trent Alexander-Arnold curled the ball into the top corner with a lovely free-kick.

What a free-kick from Alexander-Arnold! Hennessey has absolutely no chance!

The Reds continued to control the opening 45 minutes and they made their dominance count once more in the 43rd minute.

Midfielder Fabinho, who has dealt with some injury troubles this season, floated an inch-perfect pass into Salah’s path and the Egyptian made no mistake as he tucked the ball into the back of the net.

Salah doubles the home side's advantage before the break and brings up 100 goals in all competitions for #LFC!

There was some sketchy defending on two occasions for Palace in the opening few minutes of the second period of play, with the Reds unlucky to not have snatched a goal.

Fabinho quickly put the tie to bed in the 55th minute though as he scored with a stunning long-range effort, the ball soared into the top corner from very far out.

Liverpool’s front-three showed that you literally only need to give them an inch for them to run a mile with a wonderful team goal in the 69th minute.

Firmino’s fine ball control and dribbling steered him away from pressure, the Brazilian laid the ball off to Salah and the forward showed he’s not selfish at all by playing in Mane with a superb first-time through ball.

Mane charged forward before slotting the ball into the back of the net to make it 4-0.

Palace were understandably jaded from this point on, they were simply waiting to be put out of their misery with the final whistle after Liverpool’s fourth. 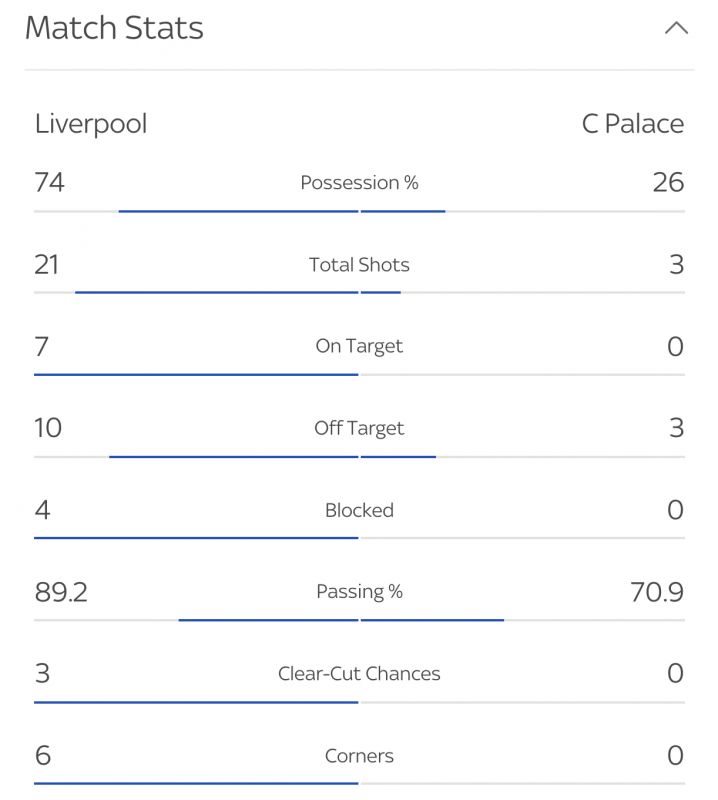 Liverpool certainly proved that they are worthwhile soon-to-be champions with a controlled performance this evening, especially after the reaction to their goalless draw against Everton on Sunday.

The Reds also showed that there’s much more to their attack than just tearing teams apart on the break, with stars impressing with their moments of magic and brilliantly timed runs this evening.

Palace don’t have anything to worry about after tonight’s result, Roy Hodgson’s men sit ninth in the league and clear of any relegation trouble, there’s no shame in losing to this Liverpool side so it should hardly dent their confidence too much ahead of their next game.