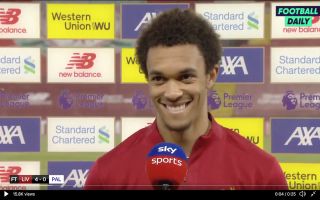 Liverpool star Trent Alexander-Arnold understandably couldn’t contain the excitement why Sky Sports’ reported made him aware of just how close the Reds are to the title after tonight’s win.

The Merseyside outfit were superb against Crystal Palace in a 4-0 win this evening, Trent gave off a massive smirk and smile before dishing out a media-friendly response.

We can’t even image how the 21-year-old is feeling right now, he’s potentially just one sleep away from winning the Premier League title with his boyhood club – it doesn’t get much better than that.

Take a look at the lovely moment below:

? "We've waited a long time for this and we've worked hard for this"

Trent Alexander-Arnold on being one step closer to becoming champions pic.twitter.com/941V1vwenY

Klopp’s men have been absolutely phenomenal this season, they deserve all the plaudits, this squad of players will all go down as heroes for delivering the city its first league title in 30 years.