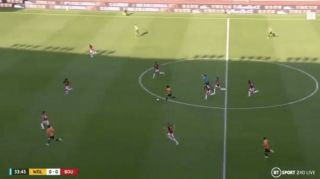 After terrorising West Ham’s defence in Wolves’ last game when he came on as a second-half substitute to change the course of the game, Adama Traore once again showed what he was all about in the first half against Bournemouth.

The flying winger has pace to burn and a physique that makes him incredibly difficult to shake off of the ball, but when he picked the ball up well inside his own half, surely no one expected him to evade five tackles before outpacing the covering defenders and only being stopped in his tracks by the crudest of tackles.

Liverpool, who’ve been linked with a move for the player, per the Daily Mirror, are likely to have watched on with interest. Footage below courtesy of BT Sport.

Adama Traore was only getting stopped one way here! ? pic.twitter.com/Jx3FJcBWEc