Arsenal put their miserable week behind them with an important 2-0 win away to Southampton this evening.

Goals from Eddie Nketiah and Joe Willock earned the Gunners their first three points since Project Restart kicked off last week, with Mikel Arteta’s youthful side doing the job at the St Mary’s Stadium.

Both goals were from academy graduates, with Nketiah in from the start ahead of Alexandre Lacazette in what as a pretty big call from the manager.

Lacazette seemed chilled out enough about the situation though… 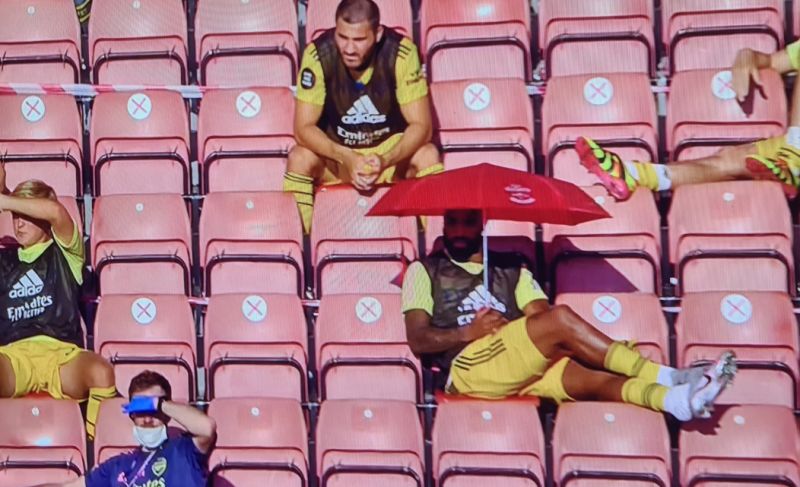 It wasn’t really a vintage performance from Arsenal at any point, but they got the slice of luck they needed in the 20th minute.

Southampton goalkeeper Alex McCarthy had an absolute nightmare trying to pass out from the back, and Nketiah pounced from close range.

Just look at this, we can’t all be Alisson or Ederson, mate…

While Southampton occasionally threatened, with Danny Ings lively, it was a fairly convincing first half from Arsenal overall, with Granit Xhaka seeming to bring some much-needed calm to their midfield.

The Switzerland international has not always had the best of times at the Emirates Stadium, particularly earlier this season when he stormed off after being subbed against Crystal Palace, but he showed his worth today as he came in for Matteo Guendouzi.

The young Frenchman lost the plot a little in Arsenal’s weekend defeat at Brighton, and was notably not even on the bench for this early evening clash today.

One concern for Arsenal, however, is the lack of impact being made by Dani Ceballos, who has been on loan from Real Madrid this season…

It’s not yet clear if Arsenal will make Ceballos’ move permanent, but on this evidence, he probably isn’t worth it, and good luck to him if he thinks he’s getting in the Real Madrid team any time soon.

Arsenal made the game safe late on, with substitute Lacazette having two shots saved before the ball finally fell to Willock from close range.

The youngster made no mistake with a composed finish from close range, and the celebrations tell their own story as this win was so badly needed for the Gunners…

See below as the Spaniard tweeted this GIF, in reference to his plan to plant 3000 trees for every game Arsenal win between now and the end of the season. His side lost twice since making that vow, so he must be relieved he’s finally able to start putting it into action!