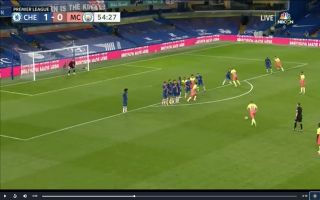 In the 54th minute of tonight’s massive encounter between Chelsea and Manchester City, Kevin de Bruyne got his side back level with a moment of magic against his former club.

Pep Guardiola’s side had a free-kick from around 30 yards out, Belgian superstar De Bruyne stepped up and curled the ball right into the top corner with a fantastic hit.

De Bruyne’s ability to strike the ball – for a midfielder – is unmatched.

Take a look at the midfield maestro’s spectacular hit below:

De Bruyne is one of the most dangerous players when it comes to dead-ball situations in the world.