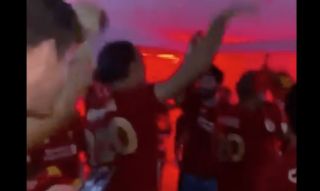 Liverpool players and staff were always going to enjoy themselves once it was confirmed that they had won the 2019/20 Premier League.

The coronavirus pandemic delayed the announcement for a few months, but as long as the season restarted again, it was never in any doubt that the Reds would win their first English top-flight title in 30 years.

They did so without having to kick a ball as Chelsea’s victory over Manchester City meant that Liverpool couldn’t be caught at the summit.

The partying continued long into the night and Trent Alexander-Arnold managed to capture his team-mates dancing to 90s classic Show Me Love. You can watch the Reds bust a move or two below.