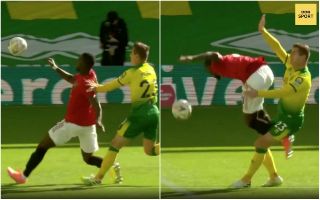 The centre-back, who was making just his seventh appearance for the side this season after constant injury troubles, leapt through the air like a salmon after a light barge/shove from Kenny McLean.

It looked as though Bailly really used some build-up to propel himself into the air and onto the ground, the referee didn’t punish the defender for his theatrics.

Bailly played 96 minutes for Ole Gunnar Solskjaer’s side before being replaced by Anthony Martial.

Take a look at the Ivorian’s antics below:

Here’s some reaction to the centre-back’s theatrics:

Tom Daley would be proud of that one

Tom Daley would have been proud.

Got to start banning players for stuff like this, stamp it out of the game

People slating jeans but he called this right. Terrible dive.

Clear dive and it’s not the only one. United players going down so easy

Jokers, no place in our game for cheats?????

The fact that a couple of fans have even likened Bailly’s effort to one that British diving superstar Tom Daley would be ‘proud’ of says it all really.

Whilst most can look back at this in a fairly light-hearted manner, it does highlight a serious problem that needs stamping out of the beautiful game.