Southampton showed their clinical touch once more in today’s Premier League clash against Watford, just as they did recently against Norwich.

Ralph Hasenhuttl’s men are arguably the best attacking side outside of the top-flight’s top 10, the side – led by prolific frontman Danny Ings, ran out 3-1 winners against the Hornets today.

Here’s how the two sides lined up for the clash:

Subs: 73′ Welbeck for Hughes, 74′ Joao Pedro and Holebas for Pereyra and Holebas. 79′ Pussetto for Femenia.

Southampton kicked off the game with a high-pace, forwards Shane Long and Danny Ings – well-regarded for their pressing kept Watford on their toes in the first 15 minutes of the encounter.

Less than a minute after a half-chance from Long, Ings opened the scoring for the Saints with a sensational effort.

Academy graduate Will Smallbone picked up the ball deep before laying it off to Ings, the forward was crowded but still managed to skip past one man and create enough space to drill a lovely finish into the bottom corner.

Danny Ings brings up his 20th goal of the season to put #SaintsFC in front!

The opening 45 minutes also included a few injury scares, Long and Oriol Romeu were both down for a little while after two separate collisions.

The Hornets’ talking point from the first-half was a penalty shout in the 41st minute, tricky winger Ismaila Sarr appealed for a spot-kick after a tussle with Ryan Bertrand.

The Senegalese starlet even stopped his run and protested for a penalty when he might’ve been able to carry on and squeeze a cross in.

Watford weren’t completely on the back-foot in the first period of the match, the Hornets just lacked the clinical touch that Southampton possess, spearheaded by star centre-forward Ings.

Watford started the second period of the clash in a positive manner, Sarr saw a goal-bound effort blocked by Bertrand early on.

Nigel Pearson’s men ultimately paid the price for their comparative lack of quality in the final third as Ings bagged his second of the game by punishing a mistake from Ben Foster.

In the 69th minute of the tie, Ings latched onto the ball after a poor throw from Foster, the England international surged forward before drilling the ball into the back of the net from a tight angle.

Ings plucks Foster's poor throw out of the air before picking out the far corner via a deflection!

The Hertfordshire outfit had a momentary glimmer of hope when the pulled a goal back in the 79th minute, Jan Bednarek turned the ball into his own net after a dangerous cross from left-back Holebas.

The fault can’t really lie with Bednarek for this as the Polish centre-back did his job by preventing Danny Welbeck a touch on the cross which would’ve certainly led to a goal anyway.

England international James Ward-Prowse quickly shattered Watford’s chances of getting anything from the game by scoring a sensational free-kick in the 81st minute.

What a free-kick from James Ward-Prowse!

It's a stunning free-kick and one that should seal all three points for #SaintsFC!

Ward-Prowse is well-regarded as an expert from dead-ball situations and the boyhood Saints fan proved this once again with a wonderful strike.

Nathan Redmond was inches away from making it 4-1 in the 88th minute, the tricky winger skinned his man before curling an effort that rattled off the post. 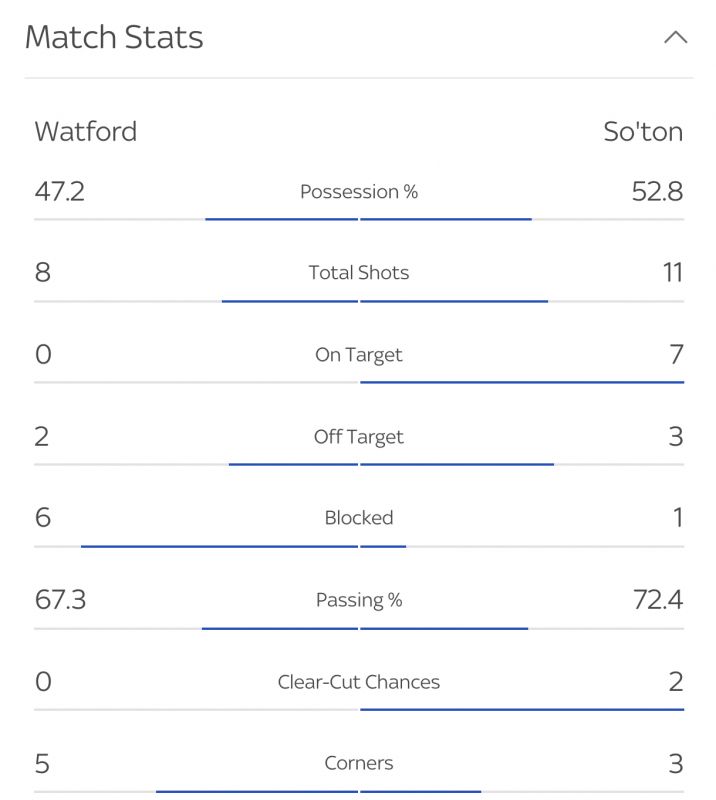 Watford paid the ultimate price for not making the most of their chances, the Hornets were by no means dominated over the 90 minutes, they just lacked the same clinical touch that the Saints did.

The Hertfordshire outfit sit just above the relegation zone after today’s defeat, however two of their direct rivals for survival – West Ham and Bournemouth – are just a point behind with a game in hand.

As I’ve mentioned before, Southampton’s attacking ability is truly superb, Hasenhuttl’s side are by far the best team in the final third when it comes to sides outside the top 10.

The Saints’ high-pressing and counter-attacking style allows top attackers like Ings to punish sides in quick flashes – this is exactly what happened at Vicarage Road today.

Southampton have hit the all-important 40 point mark after today’s victory, the side sit comfortably in 13th and in no danger of relegation this season.

Man of the Match: Ings, the ace is now just one goal behind Jamie Vardy in the Golden Boot race, the 27-year-old’s impressive run since the restart make him a solid contender for the honour.