Yorke admitted that the lightning-fast City star is a player he ‘likes a lot’, the 24-year-old has been one of the most dangerous wingers in Europe over the last few years.

The Mirror report that Sane returning to his homeland seems to be the best bet, with Bayern Munich leading the race for the attacker’s signature.

Pep Guardiola already confirmed earlier this month that the Germany international has continued to reject City’s offers of a new contract, adding that the ace will now be sold as he prepares to enter the final years of his contract.

Yorke hinted that Ole Gunnar Solskjaer’s side should eye Sane as an alternative to prime target Jadon Sancho, who is valued at a massive £100m.

The Mirror add that Sane’s price-tag is much lower, however the Citizens will do their best to avoid the sale of the ace to a rival. 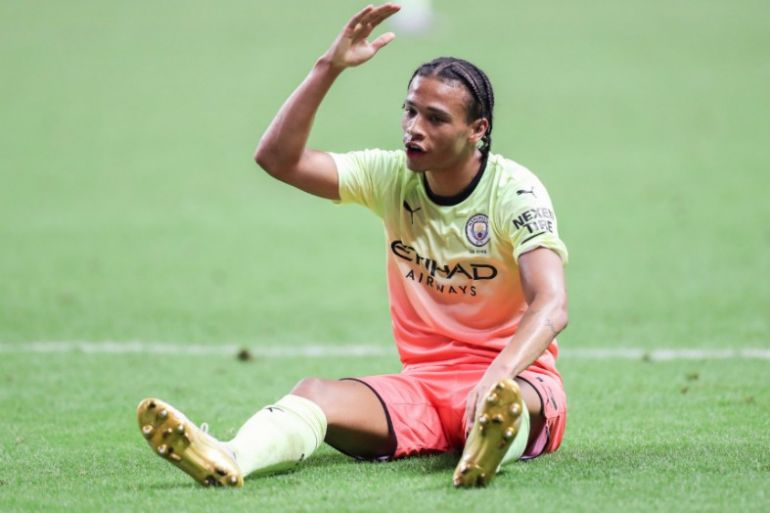 Leroy Sane is now being heavily linked with a summer exit from Manchester City.

Here’s what the legendary striker had to say on United making a swoop for the German star:

“United have got a real good attacking bunch of young players, add in Sancho, I like the boy Sane. If I was to airdrop, the boy Sane at City I really do [like].”

“We haven’t got a left-footed sort of winger. The boy [Mason] Greenwood is coming to the fore recently but I like Sane.”

“I really do think this kid is probably the quickest out of all them as well and he’s really got a good attitude.”

“I know he’s got some injuries but if I was brave, if I was Man United manager at this point in time that’s the type of person I would go for.”

Yorke gave some further reasons why Sane would be a mighty fine option for Solskjaer’s side:

“He’s had a couple of years in the Premier League, I’ve watched him very closely, he’s a player that I like a lot,”

“The boy Sancho is obviously up there as well but if you can’t get him why not be brave and go for a player who’s played across next door and cause some stir, just stir it up a little bit.”

Sane has just recovered after a serious knee injury sustained in the season-opening Community Shield clash, the ace did return to action with a cameo appearance in City’s recent demolition of Burnley.

The electric winger joined the Citizens in the summer of 2016, the ace has recorded a brilliant 25 goals and 28 assists from 90 top-flight appearances. There’s no doubt that Sane is a top winger.

In total, Sane has registered 39 goals and 45 assists in 135 appearances for the Manchester outfit.

Of course, Sane is coming off the back of a big injury, so any side that recruit the star would be taking a risk of sorts.

At just 24 years of age though, Sane has time on his side, he’s got plenty of time to take his time as he continues his recovery before battling to re-establish himself as one of the world’s best wingers.