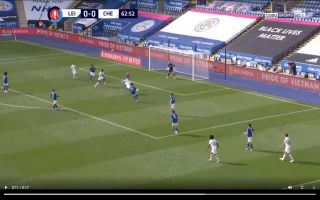 In the the 63rd minute of today’s FA Cup Quarter-Final clash between Chelsea and Leicester, the Blues broke the deadlock after a lovely team move.

Centre-back Antonio Rudiger laid the ball off to Cesar Azpilicueta after charging forward, the club captain exchanges a few passes with Willian.

The Brazilian found himself in plenty of space on the right-wing and floated an inch-perfect cross into the box, Barkley slid down to volley the ball into the back of the net with a tidy finish.

Take a look at the England international’s opener for the Blues below:

Chelsea lead in the #EmiratesFACup quarter-final and it's Ross Barkley with a great finish!

Willian with the ball in and Frank Lampard's men break the deadlock ? pic.twitter.com/oQnyBvhyf6

Barkley only came on once the second-half started for promising talent Billy Gilmour, the former Everton star didn’t take long to bag a key goal for the Blues.