Sean Dyche will be the happier of the two managers with his side taking all three points thanks to Ben Mee’s sensational diving header, Roy Hodgson surely left to rue the chances that his side wasted.

It wasn’t until the ninth minute before we saw Crystal Palace scythe through the Burnley defence, looking threatening.

To that point, Sean Dyche’s side had been on the front foot and not allowed the Eagles any time on the ball or any space to play a longer ball into.

Having scored a pearler of a free-kick at Bournemouth recently, Luka Milivojevic, from a not dissimilar position on 12 minutes, put too much power on the ball to send it high and wide.

A Burnley corner caused panic just before the 20-minute mark, with Palace’s attempted clearance pin-balling around in the area and almost going in, and that seemed to be the cue for the Clarets to put their foot on the accelerator.

With both sides cancelling each other out in a congested midfield, chances were few and far between.

Erik Pieters fluffed his lines when well placed on 41, Guaita well off of his line but still able to gather a poorly struck shot comfortably enough.

The hosts were much more purposeful at the start of the second 45, with Wilfried Zaha involved in everything good that Palace did.

Jordan Ayew was lucky to escape without punishment just a few minutes in, wildly swinging an elbow at Josh Brownhill in full view of the referee.

VAR check, but no action against Ayew who appeared to elbow Josh Brownhill pic.twitter.com/hUDomkWWgA

Even an extensive VAR check decided that the challenge didn’t even warrant a yellow card.

Ayew was quickly involved again setting up Gary Cahill with a presentable chance, which wasn’t taken.

Just after the hour mark, the hosts were made to pay as Ben Mee’s flying header from a free-kick found the net, Vicente Guaita unable to keep it out despite getting a strong hand to it.

The defender’s header goes in off the post for a rare goal in @BurnleyOfficial colours ?#PLonPrime #CRYBUR pic.twitter.com/i7OuxjK8e0

A nasty injury to Jack Cork temporarily meant the visitors were down to 10 men until Kevin Long could be brought on.

Roy Hodgson’s side were unable to capitalise but with 12 to play, Ayew rose highest to connect with a cross which, despite him being dead centre of the goal, he could only guide over the bar.

It was all Palace for the final 10 minutes, but a backs-against-the-wall performance from Burnley saw them head north with all three points. 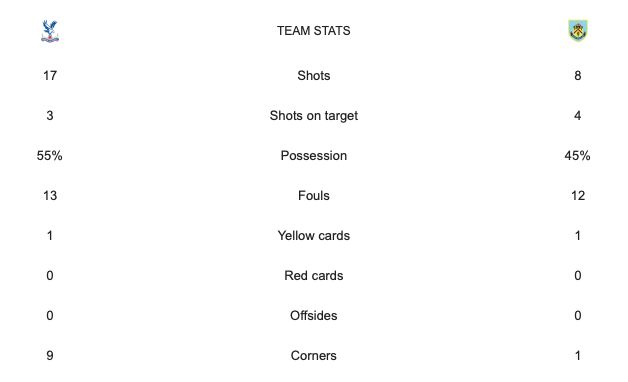 Crystal Palace undoubtedly played the better football throughout the 90 minutes, but their inability to put the ball in the back of the net came back to haunt them.

The winning goal when it arrived was an absolute beauty, Ben Mee attacking the ball and powering a diving header home.

The win takes Sean Dyche’s side up to eighth place, and the manner of their victory makes a mockery of suggestions that his time is up at Turf Moor.