#KloppOut is trending on Twitter this evening after Liverpool’s 4-0 defeat away to Manchester City in their first game as Premier League champions.

The German tactician may well have led the club to their first Premier League title in 30 years, and done so with a record-breaking seven games to spare, but the fans have spoken – it’s time for him to go.

Liverpool were poor at City this evening, with Raheem Sterling running riot against his old club to show that they really should never have let him go, despite the brilliance of Mohamed Salah, Roberto Firmino and Sadio Mane up front this season.

Klopp’s side are now only 20 points clear at the top of the table, with their lead cut by a whopping five points since the Premier League resumed last month following the suspension due to the coronavirus pandemic. 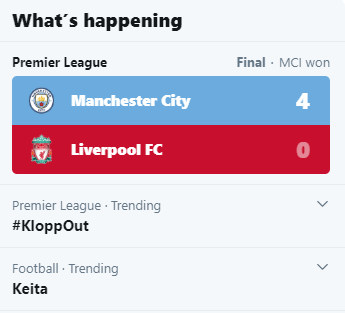 Champions or not, this is far from good enough from Liverpool, and it’s got to be time for them to make a change…

…or this is clearly LFC fans – and probably many others – having a bit of a laugh. We hope!