According to the Express, Manchester United starlet Dean Henderson has warned that he may consider an exit from the Red Devils if he isn’t given the chance to secure the No.1 spot.

Henderson made the claims to TV3, hinting that he’d have to explore a ‘different avenue’ if he’s not given an ‘opportunity’ by the Red Devils.

The 23-year-old has been solid for Sheffield United, with fine performances making the ace one of the Premier League’s best goalkeepers this season.

The Express add that Henderson is contracted until 2022, as the ace enters the final two years of his deal, perhaps United should make the talent their starter from next season onwards.

Calls for the youngster to replace David de Gea have come thick and fast recently, with the Spaniard experiencing a very difficult and error-prone season after signing a marquee contract. 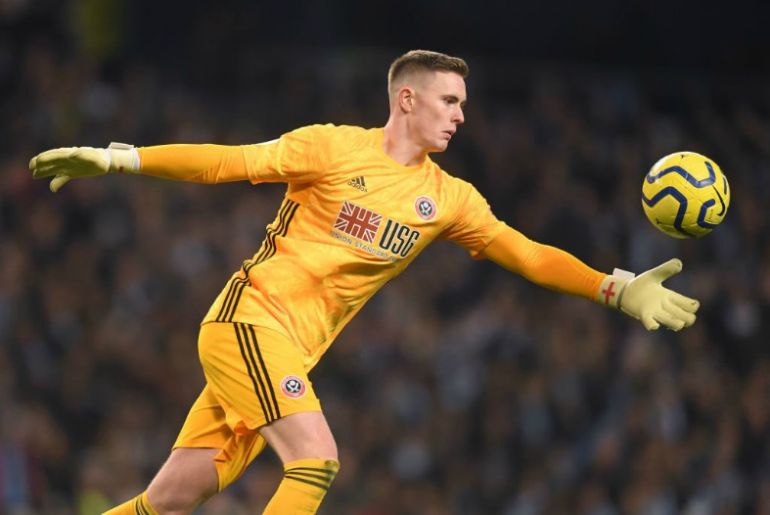 Here’s what Henderson had to say on his future:

“I think it’s clear for everyone to know. I want to play for Manchester United and England,”

“It feels like I always hit a brick wall. Maybe I’ll get the opportunity [to play for Man United], maybe I won’t, then I’ll have to look down a different avenue.”

“The fans have to remember what he’s [De Gea] done for the last nine years – he’s been phenomenal.”

“He’s probably been the best player at United for that time period. He should get another opportunity.”

“I’m a young lad. I’m working hard. I’m a fan of the club and I want to play for them. Hopefully I have a career at Man United like David de Gea has.”

As per Simon Peach, Ole Gunnar Solskjaer has made it clear that he already sees Henderson as United and England’s future No.1 – it just remains to be seen how long the ace will have to wait for this honour.

The Express add that Henderson’s fine performances, which have secured him 11 top-flight clean sheets this season, have led to Chelsea eyeing the starlet as a potential successor to Kepa Arrizabalaga.

Henderson’s rock-solid performances have helped Chris Wilder’s side find themselves in a Europa League spot in just their first season back in the Premier League after a lengthy absence.

Henderson’s comments don’t seem to hint that he wants to become the side’s starter immediately, as he also called for De Gea to be handed ‘another opportunity’ after a worrying spell.

But the starlet has made it clear that he won’t wait forever to fulfil his potential with the Red Devils, so Solskjaer has a fairly difficult choice on his hands.