On paper, this is unlikely to have been a game that Arsenal would have fancied before kick-off, Wolves being the only team to have won all of their matches post lockdown, and without conceding a goal.

However, by taking the game to their opponents and keeping them on the back foot, it allowed the Gunners to take control of a game which they dominated for the most part.

Subs: 56’ Tierney off for Maitland-Niles, 76’ Saka off for Willock, 76’ Cedric off for Bellerin

Mikel Arteta’s youthful formation was almost undone in under a minute with Adama Traore breaking the lines from the off, but Emiliano Martinez’s alertness stopped the Gunners from the worst possible start.

Both sides quickly settled into their own rhythm and Dani Ceballos’ 50-yard ball to Pierre-Emerick Aubameyang was just too short of its target.

The Gunners patrolling of the channels meant that each time Wolves tried to get their wide men forward, there was no space for them to run into.

It allowed the visitors to build a platform to frustrate their hosts, whilst at the same time dictating the pace of the match and play their own passing game.

Eddie Nketiah had already gone close for Arsenal before a fine Bukayo Saka finish just before half-time deservedly sent the Gunners in at the break 1-0 up.

A goal out of nothing for Arsenal!

Bukayo Saka re-adjusts himself brilliantly before firing past Rui Patricio for his first ever Premier League goal! ?

Wolves came out at half-time looking like a different team and had Arsenal on the ropes as Joao Moutinho pulled the strings in midfield.

Traore managed to get free at will, and a beautiful cross found Jimenez who headed just wide under pressure from Cedric.

By the hour mark, things had really heated up on the pitch with no quarter asked or given from either side.

Ainsley Maitland-Niles replaced Kieran Tierney for his 50th Arsenal appearance and he was soon into the action with Arsenal sweeping the ball from left to right.

Wolves sub, Diego Jota’s excellent run and shot deserved better than hitting a defender, but it was a sign of just how well Arsenal were sticking to their task.

On 63 and in the next attack, Traore was in one on one and his chipped finish dropped agonisingly over the bar after beating Martinez all ends up, and Wolves would come to pay for that miss.

After a period when both sides cancelled each other out, four minutes from the end substitute, Alexandre Lacazette, scored with a fine finish just three minutes after coming on for Nketiah.

Joe Willock, another sub, almost scored a third in the next attack as Wolves’ previously solid back-line went to pieces at the worst possible moment.

The final few minutes then became an exercise in keeping the opposition at bay, something that Arsenal managed easily. 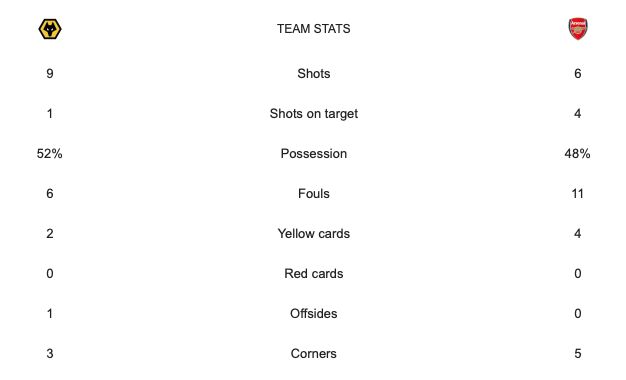 A sluggish start from Wolves was ultimately what ensured they ended this match with nothing.

Aside from Adama Traore, Nuno’s side offered little by way of an attacking threat in the opening 45, and Saka’s opener for Arsenal was nothing more than they deserved.

Mikel Arteta will be encouraged by this showing, given that he’s still experimenting with what works and what doesn’t.

If he can keep his squad onside and together as a group, then they still have an outside chance of making next season’s Champions League.