After a shaky start, Manchester United made sure there were no question marks by displaying their new-found clinical nature to overcome Bournemouth 5-2.

The Red Devils were able to offset their defensive shortcomings by overpowering the Cherries in the final third.

Here’s how the two sides lined up for the encounter:

Subs: 45′ Danjuma on for Brooks, 66′ Gosling, H. Wilson and Billing on for Cook, Stanislas and Solanke.

The opening fifteen minutes of the match were fairly closely-contested, the deadlock was broken just after this point by Junior Stanislas.

United were punished for failing to deal with a dangerous cross into the box, captain and last summer’s marquee signing Harry Maguire was nutmegged by the winger who then hammered the ball into the net.

Junior Stanislas that is naughty! ?

The winger catches Harry Maguire with the nutmeg and smashes it De Gea.

What a way to grab your first of the season! pic.twitter.com/gduFNh96xJ

Question marks should also be asked of David de Gea for his role in Bournemouth’s shock opener, the Spaniard could’ve done better to prevent himself being beaten at his near post.

Eddie Howe’s side didn’t hold their lead for very long, the Red Devils were level in the 29th minute after they got the ball into the final third quickly after winning it back on the halfway line.

Bruno Fernandes teed up Mason Greenwood and the 18-year-old fired the ball into the back of the net with a powerful finish, Aaron Ramsdale got a hand to the effort but couldn’t keep it out.

Mason Greenwood has done it again! ?

Bruno Fernandes with another assist ? pic.twitter.com/izzXmEj3Te

United were ahead just six minutes after Greenwood’s equaliser after the first of two sketchy penalty calls.

Adam Smith was deemed to have handled the ball in the box by VAR after the ace understandably couldn’t react quick enough to change his body position after a teammate missed the ball.

Marcus Rashford didn’t waste the opportunity at all though, the England international bagged his first goal of the restart with a brilliant spot-kick tucked into the bottom corner.

In a devastating blow to the South Coast outfit, Anthony Martial produced a moment of magic right on the stroke of halftime.

The Frenchman received the ball from Fernandes and skipped to the edge of the box before curling the ball into the top corner, Bournemouth stopper Ramsdale had absolutely no chance of stopping this.

Oh my word Anthony Martial that is special ?

He has now hit 20 goals in an individual season for the first time in his professional career!

The No.9 shirt suits him ? pic.twitter.com/fuY5TpGwxh

Bournemouth showed tenacity as they recovered from Martial’s goal to kickstart the second period of the game on the front foot.

The Cherries were rewarded for the efforts as just a couple of minutes into the second-half as Eric Bailly was deemed to have handled the ball right on the 18-yard line.

VAR didn’t overrule the decision to award the spot-kick, despite replays showing that the ball actually struck the Ivorian’s shoulder.

United academy graduate Josh King stepped up and got Howe’s side back within a goal with a tidy penalty.

Bournemouth had the ball in the net once more just a couple of minutes later but the goal was rightfully disallowed, Danjuma drilled the ball into the bottom corner but the ace was clearly offside when played in by King.

In an all-around whirlwind game, the first 10 minutes of the second-half were certainly the most action-packed as Greenwood bagged his second of the day just two minutes after Bournemouth’s blunder.

The wonderkid picked up the ball on the edge of the box after some lovely battle on show by Nemanja Matic, the England youth international tricked his man before firing the ball into the top corner.

Greenwood’s finishing ability is nothing short of insane for his age, the ace managed to put the ball into the back of the net from a very tight angle.

Fernandes got a goal of his own with a sensational free-kick in the 59th minute, the Portuguese ace lined up for the set-piece alongside midfield partner Paul Pogba before tucking it away.

Bruno Fernandes gets in on the goal-scoring once again ?

This guy is special ? pic.twitter.com/Nh1j7tHLid

Ramsdale will be kicking himself after being beaten on his side, regardless of how good Fernandes’ effort was.

Rashford slotted the ball into the back of the net just five minutes later after a nice low cross by Aaron Wan-Bissaka, but United were denied a 6-2 lead with the forward offside.

Substitute Odion Ighalo had a glorious chance in the 84th minute but the Nigerian fired his effort just wide after being played in by Fernandes.

Pogba almost scored a free-kick of his own during stoppage time and that proved to be the final close chance of a thrilling encounter. 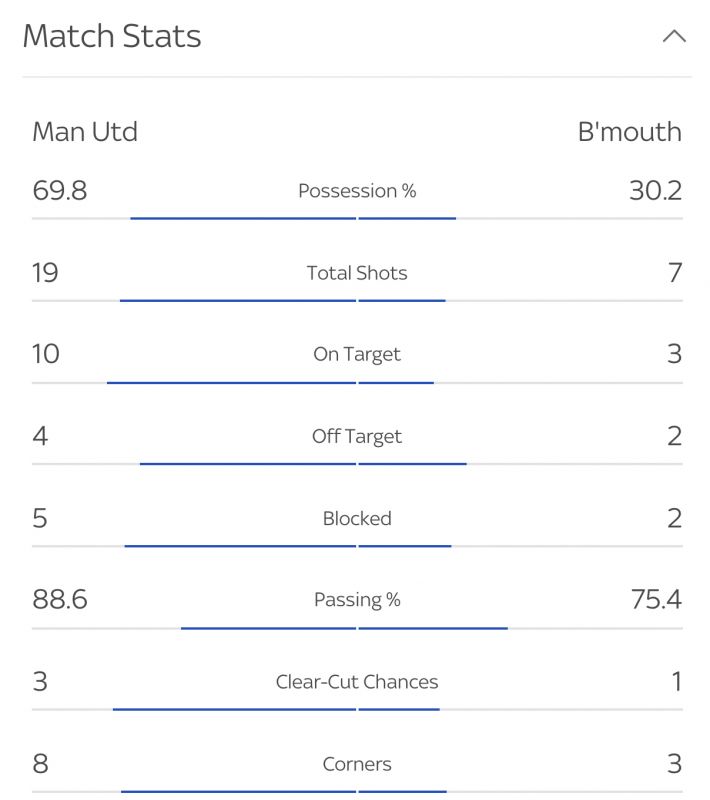 Solskjaer’s men were clinical as they won their fourth game straight, their only draw since the Premier League’s resumption came in their re-opener against Spurs.

This afternoon’s victory also extended the side’s unbeaten record to 16 games, with their last loss coming against Burnley in January – before Fernandes’ arrival at Old Trafford.

The Red Devils have pushed into fourth place now, but Chelsea will have the chance to recover their spot in a clash against Watford tonight.

United continuing their fine form has shown that if they can continue in this manner, the Manchester outfit will be taking in the momentum needed to make themselves outside title contenders next season.

United’s attack seems to have fallen right in place since Fernandes’ arrival and has looked to be on a completely different level since Pogba and Rashford returned from injury.

On the Bournemouth front, the Coastal outfit’s winless run extended to eight games – dealing a blow to their hopes of avoiding relegation.

The Cherries can still very much pull off an escape mathematically as they’re just a point behind Watford in 17th and three behind the Hammers in 16th.

The issue is that Howe’s men haven’t tasted victory in so long that it’s hard to see what they can take forward from most of their recent performances, they may have left things too little and too late.