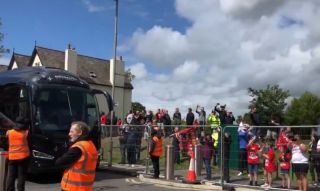 A number of Liverpool fans have once again gathered together despite pleas from the club to show their support to the team from home.

The Reds were recently crowned Premier League champions for the first time in thirty years, leading to huge celebrations around the city despite large gatherings  currently being banned due to the coronavirus pandemic.

The Reds want you to #StayStafe, as we return to action today ?? pic.twitter.com/wYv66K4RZv

Before today’s game, Liverpool tweeted from their official account to remind supporters not to come to Anfield today, with crowds obviously not allowed inside the stadium.

However, as the video below shows, a number of fans did still turn up to welcome the team bus, though a few can at least be seen wearing masks, while the angle of videos or photos of these events doesn’t always make it that clear how much social distancing is being adhered to…

Liverpool manager Jurgen Klopp recently admitted he didn’t like seeing the scenes around the city when huge amounts of fans gathered to celebrate the title victory.

Writing an open letter to LFC fans in the Liverpool Echo, the German tactician said: “What I did not love – and I have to say this – was the scenes that took place at the Pier Head on Friday. I am a human being and your passion is also my passion but right now the most important thing is that we do not have these kind of public gatherings.

“We owe it to the most vulnerable in our community, to the health workers who have given so much and whom we have applauded and to the police and local authorities who help us as a club not to do this. Please – celebrate – but celebrate in a safe way and in private settings, whereby we do not risk spreading this awful disease further in our community.”

He added: “We have all done so much to fight COVID-19 and this effort cannot go to waste. We owe it to ourselves and each other to do what is right and at this moment that means being together and being there for one another by being apart.

“When the time is right we will celebrate. We will enjoy this moment and we will paint the city red. But for now, please stay at home as much as possible. This is not the time to be in the city centre in big numbers or to go near football grounds.