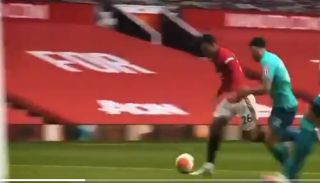 Bournemouth players did their best to deal with Manchester United wonderkid Mason Greenwood over the weekend, but he was on fire in a 5-2 victory for the Red Devils.

Watch this amusing video below without the artificial crowd noise, in which you can hear a player shouting to watch out for Greenwood cutting onto his preferred left foot…only for him to then fire the ball in on his right foot anyway…

No way Greenwood is causing them to swear at each other like this ????? pic.twitter.com/DT8PdbtVH9

Greenwood is a serious talent and he’s so two-footed there’s really little point in trying to steer him onto his left side.

In fact, the 18-year-old has even previously admitted that he prefers taking penalties with his right foot, even though he’s more naturally left footed.

Speaking to Man Utd‘s official site last year, he said: “I prefer my left foot, just about, to my right foot. Actually, it happened when I was in the Under-13s. I missed (a penalty) with my left foot against City when I was struggling in a game and ever since I’ve just gone with the right foot.”