Neither side played particularly well at White Hart Lane, but by virtue of a horribly deflected own goal from Michael Keane, Tottenham secured all three points.

A flashpoint at half-time between Spurs captain, Hugo Lloris, and Son Heung-min at least showed some passion which was sorely missing from the visitors on the night.

The first chance of the game fell to the hosts after just two minutes, with the flight of Gio Lo Celso’s free-kick causing a few problems before being diverted for a corner.

Both sides stayed on the front foot in the opening quarter hour and the action by that point had been eminently watchable with no quarter asked or given.

Tom Davies for Everton and Harry Winks for Spurs, were doing their best to dictate the rhythm of the game from midfield, whilst both defences were adept at denying the opposition strikers a sight of goal.

Lucas Moura’s speculative long-range effort was just wide on 20 and within a minute, Hugo Lloris had to be on his toes at the other end to beat Alex Iwobi to the ball.

As the action switched back down to the Everton area, the Toffees failed to clear their lines and Gio Lo Celso’s shot would probably have been saved by Jordan Pickford before Micheal Keane’s deflection completely wrong-footed the keeper to give Spurs the lead.

Giovani Lo Celso’s strike deflects in off Michael Keane to leave Jordan Pickford wrong-footed and Spurs are in front!

With little in the way of goalmouth action for the rest of the half, Pickford almost handed Tottenham a two-goal lead.

Coming for a routine corner, the keeper allowed the ball to slip through his hands, and were Spurs’ strikers a little more alert, he would’ve been punished.

Right on half-time Richarlison had Everton’s best chance, and it appears that the lack of defensive awareness from Son Heung-min in allowing the Brazilian a free run at goal, ensured his captain’s ire.

As the team went off for half-time, Hugo Lloris went hunting for the striker and had to be kept apart from him by their team-mates.

Hugo Lloris and Son Heung-min have to be separated by their teammates as they make their way off the pitch at half-time! ?

Watch the second half live on Sky Sports PL! ? pic.twitter.com/pw7l8fklBg

Everton still weren’t able to penetrate in the right areas and work Lloris, every attack easily broken up by Spurs’ defence.

As soon as Richarlison or Dominic Calvert-Lewin found some space, they were quickly closed down.

Spurs too, were quiet in an attacking sense, although Yerry Mina’s incorrect reading of a long-ball almost allowed the hosts to bag their second.

The lack of quality on show from both sides was baffling when you consider the talent available, and as the game wore on free-kicks kept breaking up the flow of the match.

On 63, Son managed to make room for himself but his curling shot was always heading wide.

It served notice on Carlo Ancelotti’s side that they were more than capable of doubling the lead, and the same player brought the best of out of Pickford a minute later.

Lucas Moura’s rash challenge on the edge of his own area then put his side in a difficult position although Everton were unable to take advantage of the resulting dead ball.

In the latter stages, Tottenham made all of the running in the game with the Toffees never really looking likely to score. 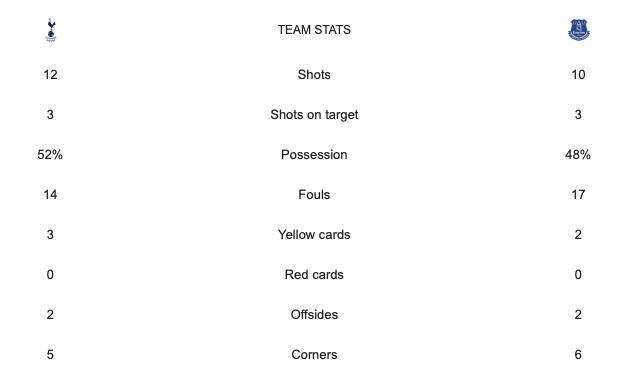 In truth it was a poor game for both sides with Jose Mourinho likely to be marginally the happier of the two managers because of the win.

Carlo Ancelotti had little to get excited about as his side were never really an attacking threat despite having players to really trouble Spurs.

After a bright start, Harry Kane faded badly and that could be a worry for the next few games.

Overall, it was a poor advert for the division and perhaps shows the tiredness beginning to creep in to each team as they continue to play every three days.