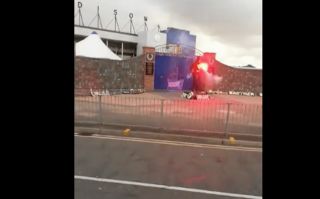 The Dixie Dean statue has long been a memorial where supporters of Everton lay wreaths for recently departed family members, and the placing of a flare on it has upset both sides of the Merseyside divide.

Video footage which appears to be captured via a mobile device shows the flare burning brightly, highlighting the flowers placed at the foot of the monument to Everton’s greatest-ever striker.

Whether it has happened in response to the scenes witnessed in Liverpool after the Reds’ Premier League title was confirmed is unclear, but these fans are clearly unhappy with the disrespect:

The Dixie Dean statue is a place where relatives lay flowers for those who’ve recently past away. ?pic.twitter.com/XaBXO6yW1P

And the Dixie Dean statue targeted again. An absolute embarrassment to the City.

Dixie Dean with my dad’s flowers a few years back.
How a memorial should look.#DixieDean #EFC pic.twitter.com/C9uARJemdD

Good to see proper Reds fans all over showing there displeasure for the fool and flare at the Dixie statue, in Liverpool we get enough hate from all over the country the last thing we need is to start hating each other, would be good to teach these flare folk a bit of history