Arsenal wonderkid Bukayo Saka is having another fine game against Leicester City tonight, having beautifully set up the opening goal for Pierre-Emerick Aubameyang.

The 18-year-old is having a memorable first season in the Gunners’ first-team, and has been a joy to watch as well as producing this incredible stat below…

MORE: Opinion: Eight time Bundesliga winner would be the perfect signing for Arsenal after it’s announced he will leave Bayern Munich 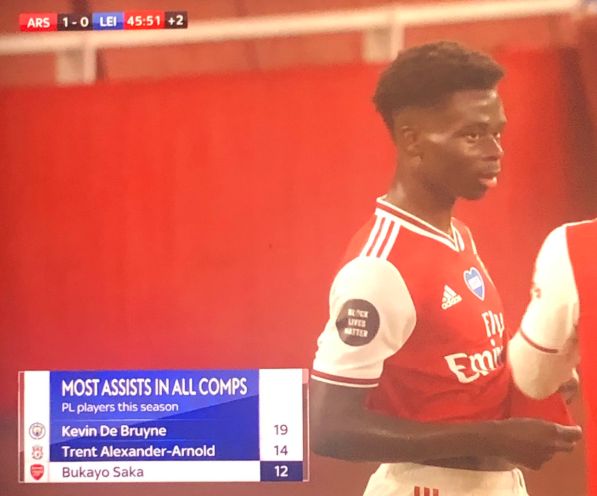 Saka has 12 assists in all competitions, meaning he’s behind only Manchester City playmaker Kevin De Bruyne and Liverpool right-back Trent Alexander-Arnold in the assist stats of Premier League-based players.

Given that De Bruyne has long been one of the finest creative players in the world in an all-conquering City team and Alexander-Arnold is an exceptional attack-minded full-back for Premier League champions Liverpool, this is some achievement by Saka.

The England youth international has also played a lot of games as a full-back himself, slotting in well on the left for a few matches earlier this season.

Wherever he plays, Saka seems to make a real impact, and Arsenal fans will be thrilled their academy has been able to produce such a superb young talent.