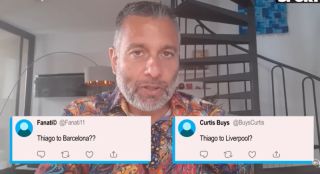 Thiago Alcantara looks set for a summer transfer to the Premier League but could be set for Manchester United or Arsenal rather than Liverpool, according to Guillem Balague.

Speaking on his YouTube channel, reliable transfer journalist Balague believes Alcantara will be leaving Bayern Munich for England this summer, but it’s not yet clear where he’ll end up.

He says that, despite the Liverpool transfer gossip, it’s not clear the Reds are really willing to spend much this summer, which could open the door for Man Utd or Arsenal to swoop for the want-away Spain international.

Liverpool fans may be disappointed by this update, but, as Balague says, the club already have plenty of quality options in that area of the pitch.

United, on the other hand, would surely benefit from another signing in that department as Alcantara could provide an upgrade on the likes of Paul Pogba and Andreas Pereira, who have both had their struggles at Old Trafford.

Arsenal’s interest also makes sense as the Gunners have had a hugely disappointing season and must surely invest this summer if they are to challenge for the top four again.

Alcantara could be a replacement for the likes of Aaron Ramsey and Jack Wilshere, with Arsenal’s current options in that area not really offering the same creativity or attacking threat as those too, while Dani Ceballos’ future is uncertain as he may return to parent club Real Madrid once his loan ends.