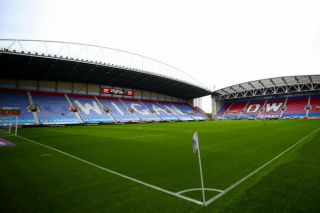 The coronavirus pandemic has truly made 2020 a year to forget, with lives tragically lost, health services overwhelmed, and our ability to live life as normal drastically altered, with no clear end in sight.

It’s easy to understand why so many were delighted to see the return of football, first in Germany and soon after in other countries, including England, over the course of the summer.

Early on in the pandemic, many assumed this would have been impossible, though others argued it would be good for the nation’s morale to get the Premier League back.

So often forgotten, however, are the lower leagues, and many clubs’ existences are now under serious threat as COVID-19 is likely to keep big crowds away from stadiums for some time.

Shockingly, however, the situation at Wigan Athletic, who went into administration last week, has little to do with the health crisis, and is merely a reminder of life outside of the Premier League.

Having changed to new ownership last month, Wigan are now bizarrely on the brink due to the shocking suggestion that their new investors may have actually bought the club as part of a gamble over the club getting relegated from the Championship.

Au Yeung Wai Kay, the new owner of Wigan, has denied these claims, insisting it was coronavirus that caused the team’s financial difficulties.

“Wigan Athletic is a wonderful football club with rich history and a passionate fanbase,” Au Yeung said in a statement.

“We bought Wigan Athletic with the best intentions: to create a team that would get the club back into the Premier League, and I have invested more than £40million (to buy it and repay a loan to former owners the International Entertainment Corporation).

“Unfortunately, the Covid-19 crisis has severely impacted people and businesses around the world – and Championship football clubs, which rely on fans coming through the turnstiles, are no exception.”

The Football League have, however, sent a strong response to this with a statement of their own in which they make it clear they’re not buying it.

Their statement read: “The League fundamentally disagrees with the comments attributed earlier today to Mr Au Yeung Wai Kay where he stated that ‘the Covid-19 pandemic has undermined the ability to fund the Club’. Whilst it is clear that Covid-19 has undoubtedly presented significant financial challenges to the professional game, evidence of the required source and sufficiency of funding to be invested in or otherwise made available to the Club, was provided as part of the recent change of control process.

“This set of circumstances is more illustrative of the wider financial challenges facing EFL Clubs, who, without a full and comprehensive reset of football’s finances, including how monies are distributed throughout the game, will continue to struggle to meet the demands of an outdated and unsustainable model.”

They added that “should any breaches of football regulations or company law be discovered, action will be taken either by the League or the body with the relevant jurisdiction to do so”.

It is certainly suspicious that Au Yeung Wai Kay would buy a football club without actually investing in it and then giving up on the project in the space of a few weeks, and as a result an entire community risks losing a crucial institution.

For too long football clubs, especially in the lower leagues, have been treated as play things, with the ‘fit and proper persons tests’ clearly not fit for purpose themselves, as they only assess if a prospective owner has enough money to invest in the club – there is no actual obligation for them to commit to doing so.

As ever, the people who lose are the fans, and at a time when football was supposed to be boosting the nation’s morale. Premier League fans may have their version of the beautiful game back, even if they’re unable to go and witness it live; the people of Wigan may soon have nothing at all.