According to ESPN, with the unsurprising emergence of Paul Pogba and Bruno Fernandes developing a deadly midfield partnership, Manchester United may divert transfer funds to improving their defence.

The Red Devils may not pursue moves for attacking midfield targets like Jack Grealish, Donny van de Beek or James Maddison and instead focus some funds on a centre-back partner for Harry Maguire.

ESPN report that Bournemouth ace Nathan Ake – who Ole Gunnar Solskjaer appeared to tap up this past weekend, Aston Villa ace Tyrone Mings and AC Milan star Alessio Romagnoli are all on the shortlist.

The Manchester outfit need to fortify in central defence before they can truly kick on and re-establish themselves as a top team.

Victor Lindelof – who has endured mix form since joining the Red Devils – and Eric Bailly – who has performed well but been hindered by injuries – are both unreliable options to partner Maguire.

Manchester United’s prime target should be a better partner for Maguire, they need to improve their defensive stability.

Maguire himself has not been amazing since his marquee move to Old Trafford last summer, the ace has turned in some questionable performances and made some costly errors.

However, the England international known as ‘Slabhead’ impact isn’t restricted to his own performance, he’s clearly lifted the side and won the captain’s armband within six months of joining.

The reported options that United are exploring are certainly interesting, Ake (25) has the most top-flight experience, Mings (27) has been on the rise over the last two years and Romagnoli (25) is already a bonafide star who is by far the most high-profile and experienced option of the three.

There’s no doubting that Romagnoli’s signature would cost the most, however the Red Devils could snag a relative bargain with either Ake or Mings – especially if their respective sides are relegated. 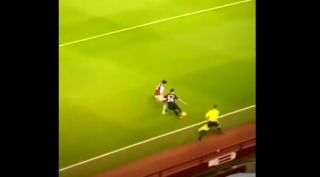