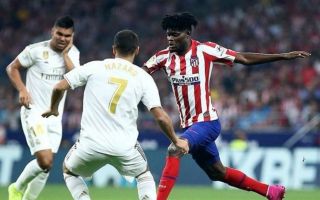 Arsenal are reportedly trying to get a deal done for Atletico Madrid midfielder Thomas Partey, but are yet to reach an agreement, according to Fabrizio Romano.

The Ghana international has previously been strongly linked with a potential £45million move to Arsenal by Football Ghana, but CaughtOffside understands the Gunners have their doubts about being able to afford the deal at that kind of price.

Arsenal could do with a talent like Partey in their team right now, with Mikel Arteta facing a big struggle to get his side into Europe next season as things stand.

The likes of Matteo Guendouzi and Lucas Torreira have not really been good enough for Arsenal for some time now, and there seems little doubt Partey would be a big upgrade.

It is little wonder then that Romano claims the 27-year-old is a target for AFC, though he also suggests nothing is really close to being agreed at the moment…

Arsenal trying, yes. Agreement or something similar, at the moment no.