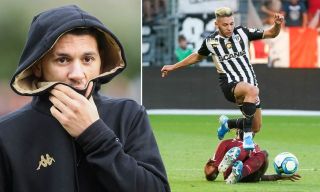 Sometimes you just see a headline that psychically makes you facepalm, and that’s precisely what we have here.

Algerian international Farid El Melali may be known to football fans as a fringe player who’s done well to work his way up through the divisions, but he will likely go down in history for something else.

It’s strange to read quotes from his lawyer which suggest he both denies any wrongdoing but is also deeply apologetic, so it does make you wonder what’s gone on.

The first incident happened back in May where distressed neighbours reported that he was spotted touching himself outside of a young woman’s flat.

He claims that he thought he was alone, but if it’s in a public place then that shouldn’t really matter.

They also suggest that the female who was affected by this recognized him from the publicity that came from the first time that it was reported, so it will be interesting to see what happens to him this time.

It could be hard for his club to stand by him, while he’ll also have to come up with a much more creative excuse.