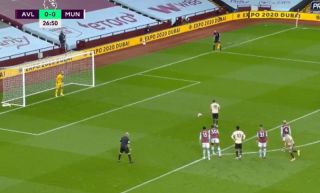 Manchester United have got pretty lucky again when it comes to penalties in the Premier League.

Watch below as Bruno Fernandes puts away the spot kick with his usual quality, but many people on Twitter are complaining about the VAR decision here…

Fernandes’ fine form for Man Utd continues as his strike puts the Red Devils 1-0 up away to Aston Villa, but it’s yet another penalty for Ole Gunnar Solskjaer’s side.

See below as many are unimpressed with this spot kick being given, with some slamming VAR and others pointing out quite how often these decisions seem to favour United…

I am sorry, but that was not a penalty. VAR continues to be a joke?

How the hell is that a pen? #villa

Manchester United been awarded 13 penalties in the Premier league this season.

The same number as the bottom 8 teams combined.

Man Utd win their 13th penalty of the Premier League this season pic.twitter.com/gBNgL7BX4S

United pens since the start of last season: 25

That penalty is a joke. VAR is more of a joke.