Chelsea looked to play their naturally expansive game, but, as so often this season, Chris Wilder’s game plan was spot on, and nullified the west Londoners’ threat.

Subs: 63’ Berge off for Lundstram, 63’ McBurnie off for Mousset, 69’ Basham off for Jagielka

Chelsea approached this game with all of the swagger that might be expected from a side that could cement third place in the Premier League with a win.

Perhaps that over-confidence played right into Chris Wilder and Sheffield United’s game plan as it was the Blades that were first to every ball in the opening exchanges.

The match was a decent watch with both teams looking to spray the ball around at every opportunity.

On 18 minutes, Mason Mount’s attempt to dribble out of the area wasn’t the best idea and after being dispossessed, the ball was played to Oli McBurnie.

His goal-bound effort should’ve been collected by Kepa Arrizabalaga, but the Spaniard was only able to parry it into the path of David McGoldrick who finally managed to score his first Premier League goal.

He puts the hosts a goal up against Chelsea!

As the half wore on, the hosts began to dominate the midfield, their five-men easily keeping the ball against more illustrious opponents.

Aside from Tammy Abraham’s attempts on goal, Chelsea didn’t really have two much to shout about, and their defence was all at sea again when McBurnie got on the end of a wonderful cross to power home a headed second on 33.

At half-time, Frank Lampard’s face told its own story.

The pattern of the game continued into the second half, as both sides worked hard to create an opening.

Despite two substitutes right at the beginning of the half, Chelsea still looked worried when United’s strikers bore down on their area.

They did manage to start putting United under some pressure, with Olivier Giroud almost scoring with his first touch after coming on as a substitute.

With Chelsea then looking as though they could reduce the deficit, their intricate passing moves starting to open up the gaps, they were hit with a sucker punch.

Sheffield United poured forward and as the ball was played into the box, sub Antonio Rudiger inexplicably kept the ball alive by playing it directly into McGoldrick’s path for him to smash his second, and the Blades’ third of the game.

Three for Sheffield United and two for David McGoldrick!

He had zero Premier League goals before today.

It was nearly four as Mousset was sent clear, showing a clean pair of heels to the Chelsea defence on 81, but his chipped finish just went the wrong side of the post.

A late flourish from the Blues almost brought a consolation, but in truth they got what they deserved. Nothing. 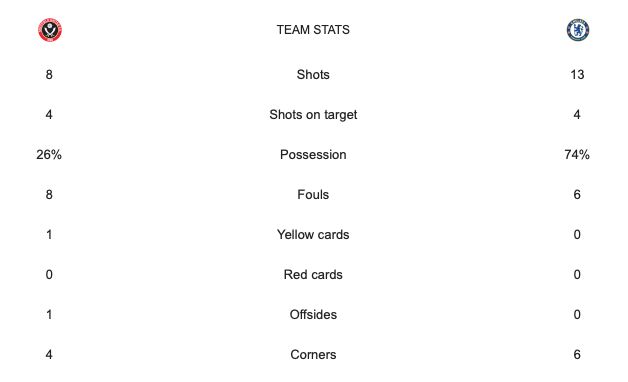 Sheffield United showed exactly what they were about v Chelsea.

The win puts them into sixth in the Premier League table, and if Wolves fail to beat Everton on Sunday, that’s where the Blades will end the weekend.

The result was fully deserved. Chelsea played the way we’ve come to expect in the opening stages, but when it was time to go to work, there was only one team in it, and that will disappoint Frank Lampard.

Even he can’t have any complaints. The best team won.