Arsenal fell to a late defeat against north London rivals Tottenham Hotspur, the Gunners paid the ultimate price for their lacklustre defending.

It is Jose Mourinho who has come away with the bragging rights in the first north London derby between the Portuguese taskmaster and Mikel Arteta.

Here’s the two sides lined up for the heated clash:

Subs: 70′ Saka on for Pepe, 84′ Willock, Nelson and Cedric on for Tierney, Kolasinac and Bellerin.

The early stages of the encounter were fairly end-to-end, Emiliano Martinez was called into action just under 10 minutes in as he scooped up a lob from Harry Kane.

The deadlock was broken in the 17th minute with a phenomenal long-range strike from Alexandre Lacazette after Granit Xhaka won a 50/50 for the Gunners.

A thunderbolt from Alexandre Lacazette which put Arsenal ahead! ?

Son made no mistake as he effortless lobbed the ball over Martinez.

Heung-Min Son capitalises on some poor Arsenal defending to level for Spurs!

Spurs almost took the lead in the 30th minute after a surprise strike from way out from left-back Ben Davies, Martinez proved his worth with a wonderful fingertip save to tip the ball onto the crossbar.

The opening stages of the second period were fairly uneventful but proceedings soon turned eventful.

In the 58th minute of the tie, Pierre-Emerick Aubameyang hit the post after being slipped in by partner Lacazette, Hugo Lloris was left rooted to the spot as the ball rattled away.

This was arguably Arsenal’s best chance of the second-half, Spurs then started to grow into the game, with Kane and Son causing serious problems to the defence.

Just minutes after Aubameyang saw a volley saved by Lloris, Kane won a corner for Spurs after he was allowed to burst into the box following some shaky defending.

That set-piece decided the game as Toby Alderweireld scored from Son’s corner, the centre-back exploited a mismatch with Kieran Tierney to steer a bullet header into the back of the net.

Toby Alderweireld's powerful header has given Tottenham a late lead in the North London Derby!

Arteta’s side were duly punished for utilising a risky zonal marking scheme. 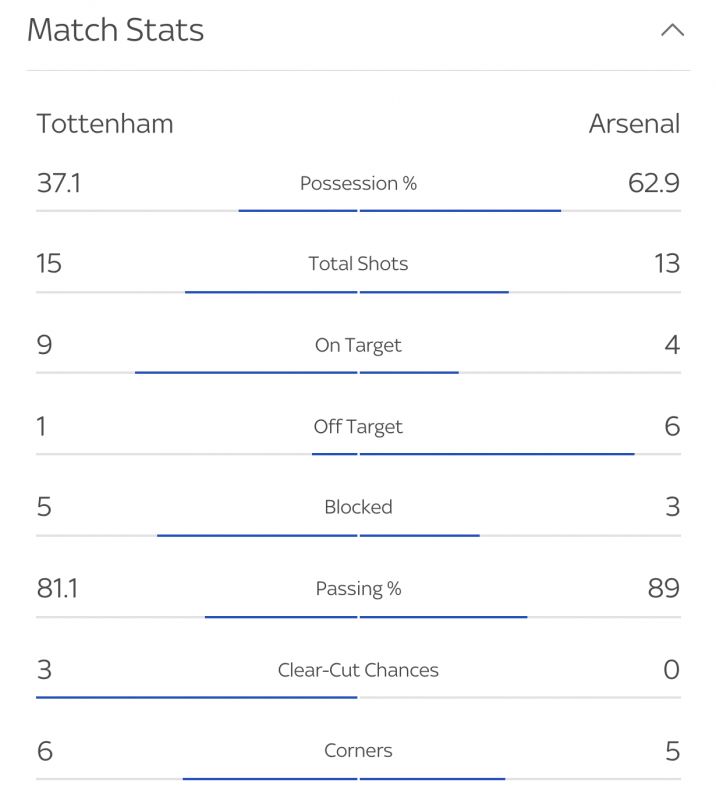 Mourinho’s decision to surprisingly switch to a 4-4-2 formation seemed to catch Arsenal off guard this afternoon, this change made Spurs look much more threatening going forward.

Son’s tireless runs all across the pitch stretched Arsenal’s defence, leaving Kane in favourable positions to be played in or free to beat defenders in one-on-one scenarios.

Spurs have looked lacklustre going forward for some time now, the tactical change gave the side a fresh spark in the final third that paid off.

Having two centre-forward’s in Kane and Son led to Arsenal’s three centre-back system being exploited, Mustafi and Kolasinac were drawn away from the centre – opening up plenty of chances for Spurs.