The Blues are said to be set to launch an offer worth an initial £62million, with add-ons included to meet his likely full asking price of around £90m.

See below as transfer journalist Nicolo Schira also claims Chelsea could sell as many as three first-team players – Jorginho, Emerson Palmieri, and Tiemoue Bakayoko – to help fund the deal… 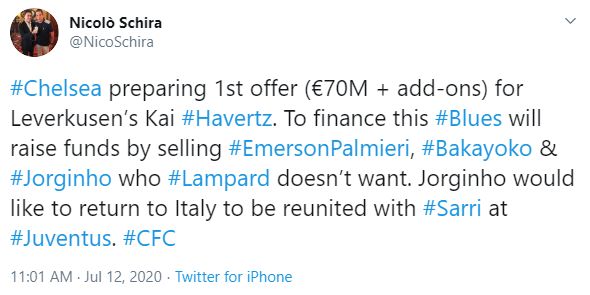 Chelsea fans will be excited by this big update as it seems they’re set to firm up their interest in getting the Havertz transfer over the line.

Earlier today, reports suggested the west London giants may be at odds over how to prioritise their transfer targets this summer.

Video: Horrendous defending from Watford gifts James Maddison the opener for Leicester
Pundit explains the mistake Manchester United have made with Cristiano Ronaldo
Video: ‘Was never going to happen’ – Roy Keane downplays the idea of him being interim Man United manager

Some at Chelsea are thought to be eager for a defender to be brought in next after earlier deals for Timo Werner and Hakim Ziyech.

Still, it looks like CFC remain intent on going after another top attacker in Havertz as well.