A wonderful advert for the Premier League saw honours even after Michael Obafemi’s injury-time strike gave Southampton a point at Old Trafford.

Ole Gunnar Solskjaer can’t be disappointed by how his Man United team played, but the sucker-punch has put a dent in their Champions League qualification hopes.

The game got off to a relatively slow start, with a congested midfield not allowing either side to get a foothold.

Southampton’s Kyle Walker-Peters was involved on a couple of occasions as he burst forward, and it was his cross-field ball that begun a move which ended with David De Gea smothering the ball.

As the game began to open up, the visitors’ defensive shape allowed them to stay on the front foot against a sprightly United outfit.

Anthony Martial should’ve done better with a one-on-one after James Ward-Prowse’s mistake, and soon after, Paul Pogba’s dallying on the ball just outside his own penalty area saw him robbed by Danny Ings before the ball was worked out to Stuart Armstrong to fire home.

Paul Pogba is caught out and Southampton strike first! ?

An ice-cool finish from Stuart Armstrong for the Saints…?

That seemed to kick United into gear. Marcus Rashford had one ruled out for offside, but soon made up for it by bagging the equaliser on 20 minutes.

Both sides continued to attack at every opportunity and there was a good ebb and flow about the game.

With chances at a premium, Southampton really should’ve had someone on the end of Walker-Peters’ inviting cross just after the hour mark.

Defensively, United were compact at the back, and it allowed the front four to take the game to their opponents.

It did leave them exposed on the odd occasion, the speed with which the Saints could break meaning that Harry Maguire et al really had to be on their mettle at all times.

After rolling his ankle badly in the latter stages, Luke Shaw was replaced, his replacement, Brandon Williams, sticking well to his task initially.

Another brilliant run by Martial from his own half on 80 minutes deserved a goal, but as he pulled the trigger, he sent the shot high and wide.

Saints sub, Shane Long, then worked David De Gea as the visitors sensed an opportunity for a late equaliser, and it took an outstanding save from the Spaniard on 85 to keep United ahead.

Williams didn’t see out the end of the match after a sickening clash of heads left the youngster with a nasty gash that wouldn’t stop bleeding.

Southampton were still knocking at the door deep into injury time, and a wicked corner from Ward-Prowse found substitute, Michael Obafemi, at the back post to grab a deserved point. 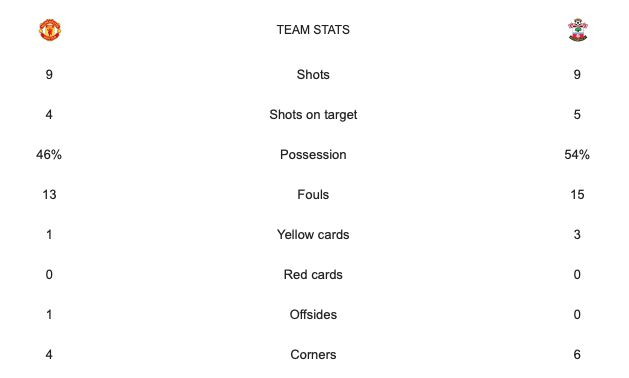 Man United’s unbeaten run continues, but the result was no more Southampton deserved after a polished performance.

On another day, the Saints might well have walked away from Old Trafford with all three points, and their play certainly deserved their reward.

Ole Gunnar Solskjaer will surely be ruing the lack of concentration right at the end of the match which dents their hopes of Champions League qualification.