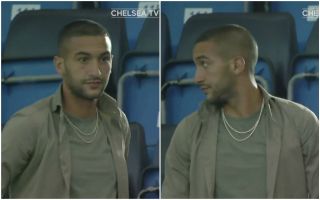 Chelsea fans will be absolutely delighted to see that new signing Hakim Ziyech is on hand to support his new teammates in their crucial clash against Norwich this evening.

Norwich are already relegated, but the Blues can’t afford any slip ups as they’re in a fierce battle with Leicester and Manchester United for the two Champions League spots that remain up for grabs.

Frank Lampard’s side would be a position lower in fourth if it wasn’t for Manchester United conceding a last-gasp equaliser to Southampton last night.

Look who's here to cheer on his new team-mates!
Welcome to the Bridge, Hakim! ?#CHENOR pic.twitter.com/362JRiW2fr

Chelsea pre-agreed a deal for Ziyech back in February, as per Ajax’s official website the Blues have signed the Moroccan star for an initial fee of €40m, which could rise to €44m.