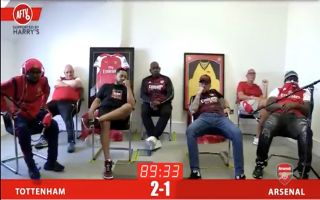 After news that AFTV (formerly Arsenal Fan TV) contributor made a disgusting racist comment regarding Spurs’ Heung-Min Son, the platform are in hot water again after a comment from Troopz.

AFTV’s Ty was furious after Bukayo Saka was shown a yellow card for throwing the ball on the floor, he wanted England captain Harry Kane booked as well for an act of dissent in the aftermath.

Troopz then claimed that “Harry Kane is white so he must be right” – hinting that the forward’s white privilege allowed him to go unpunished.

Not defending Claude in any way shape of form! But the only fans that are really pushing this Claude dvd accident are spurs or fans who hate AFTV. He was wrong to say it. But nobody is talking about troopz saying “Harry Kane is white so he must be right”? @AFTVMedia #Claude #aftv pic.twitter.com/iQEwSt5uTb

What about this one mate from troopz pic.twitter.com/HvtOpSqdu8

With two hugely controversial incidents during the watch-along as Arsenal lost to north London rivals Spurs, AFTV will surely be in serious trouble and the platform’s future could come under question.