Many big clubs will be chasing their own Virgil van Dijk after the immense success and impact made by the Dutchman since his big transfer to Liverpool from Southampton back in January 2018.

The Reds have been transformed since Van Dijk rocked up at Anfield, and if you asked most football fans who the best centre-back in the world right now is, most of them would answer with his name without much hesitation.

Still, Man Utd spent big on bringing in Harry Maguire from Leicester City last summer and he’s had a solid first season at Old Trafford, even if the club as a whole have not improved as much as they would have liked.

This has occasionally seen Maguire come under fire purely not not having a Van Dijk-like impact, but some stats put together in a piece in the Sun suggest he’s actually been a lot better than many have given him credit for. 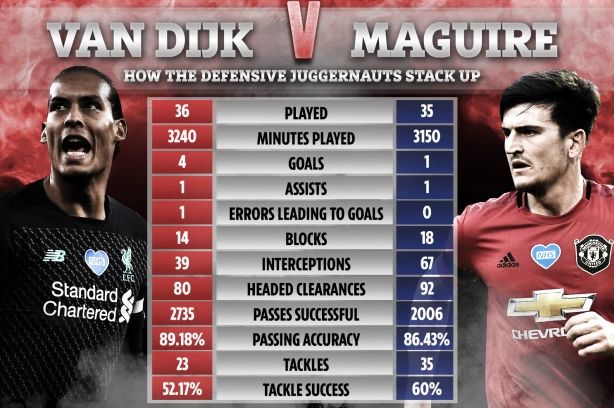 Virgil van Dijk vs Harry Maguire, graphic via the Sun

Van Dijk may well be ahead of Maguire on goals, and level on assists, but he’s made one more error leading to a goal than Maguire has, with the England international not actually committing a single such error.

The 27-year-old has also made more tackles, blocks, interceptions and headed clearances than Van Dijk, which shows just how solid and reliable he’s been for the Red Devils.

Of course, some may argue the stats don’t tell the whole story as perhaps Van Dijk has not been called upon as often due to Liverpool’s dominance in the Premier League.

Jurgen Klopp’s side have been miles ahead at the top of the table for much of the campaign and will no doubt have had a more comfortable time in a lot of games than United, meaning Van Dijk didn’t have quite as much defending to do as Maguire will have.

Still, Maguire deserves credit for these impressive numbers even if it’s been a bit of a stop-start season for him and Man Utd.